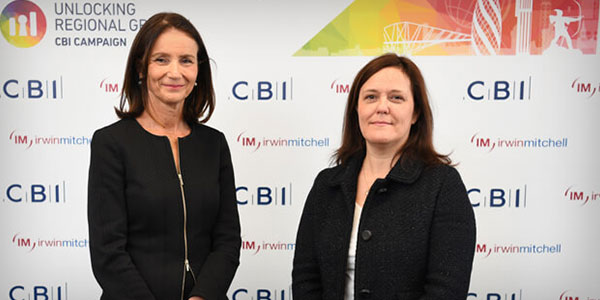 National law firm Irwin Mitchell has joined forces with the CBI to launch a new high profile campaign which aims to reduce regional productivity differences and add £208bn to the UK economy over the next decade.

The ‘Unlocking Regional Growth’ report, launched today at the Manufacturing Technology Centre in Coventry, has used special access to ONS data to determine the four main drivers of regional productivity differences across the UK. These are:

• Educational attainment of young people at 16 and skills
• Transport links that widen access to labour
• Better management practices
• A higher proportion of firms that innovate and export.

The CBI has been looking at productivity closely for some time now and has calculated that the value of goods and services produced could increase by £208bn over the next decade if each geographic area could improve at the same rate as the top performer in their respective region or nation.

National law firm Irwin Mitchell is a supporter of regional economic growth and is sponsoring the campaign. Speaking at the launch of the report, Vicky Brackett, CEO of Irwin Mitchell’s Business Legal Services division, said:

“Increasing productivity across the UK’s economy is a subject Irwin Mitchell is passionate about, particularly as it can drive greater prosperity and ensure all businesses are able to reach their full potential.

“We are fully supportive of this CBI campaign and welcome their evidence based approach which looks at each region closely and identifies tailored approaches to boosting productivity.

“There are some significant challenges ahead but if businesses and government can make it a priority and work closely together, then I genuinely believe that growth within our regions can be unlocked.”

“Right now, we’re seeing… A real commitment to those who haven’t shared in Britain’s prosperity. A real excitement around devolution to our regions and nations. And a real opportunity for an Industrial Strategy, rooted in our regions. In all of this – regional productivity will play such a crucial role.

“We saw this in last week’s Autumn Statement, which was really the Government’s productivity plan made practical. But let’s remember, regional productivity can’t be mandated from an armchair in SW1.”

As part of the project’s second phase, which will come to fruition ahead of next year’s mayoral elections, the CBI is developing productivity scorecards that will assess areas on how they perform relative to the rest of the UK, and provide recommendations level for each to highlight priorities.

These scorecards will provide business leaders, policymakers and local communities with evidence-based priorities that will help to plug the productivity gap referred to by the Chancellor in his Autumn Statement speech.

Carolyn added: “Early next year, we’ll be building on this work, publishing more than 250 of these scorecards for the UK’s nations, regions and local areas. And this data will also help fan the flames of regional success all across the UK through a modern Industrial Strategy that could raise productivity and help share the benefits of growth more fairly.

“Do we want a country which really works for everyone?

“Where everyone in the United Kingdom, whether they’re from North, South, East or West, grows up with great opportunities right on their doorstep? Raising productivity across all parts of the UK should be the single most important domestic goal of the next five years.”

Irwin Mitchell launched its own study into regional economic growth 12 months ago. The series of UK Powerhouse reports can be downloaded here.