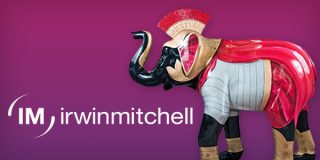 People travelling to Sheffield will be greeted by an unusual new face as they arrive at the railway station, after law firm Irwin Mitchell unveiled their contribution to the Herd of Sheffield public art trail.

The Children’s Hospital Charity team, along with logistics supplier Henry Boot, installed Irwin Mitchell’s ‘The Warrior’ elephant over the weekend.

The structure, which has been sponsored and chosen by the Sheffield head-quartered law firm, is situated in the main foyer of Sheffield station, which is the 35th busiest in the UK and the 11th busiest outside of London.

The 1.6m tall elephant, which is painted to look like it is wearing gladiatorial robes, is expected to create quite a stir with the thousands of passengers who use the station each day.

Freelance graphic designer and Hampshire based artist, Deven Bhurke, designed and created The Warrior, which will be displayed at the station until October.

Along with the other 57 elephants in the trail, The Warrior will be auctioned on 20th October to raise money for The Children’s Hospital Charity.

A team from Irwin Mitchell decided on the design earlier this year, because they felt The Warrior represented how their legal experts fight for justice and for the interests of their clients.

Elephants were chosen for theme of the trail to celebrate Sheffield’s industrial heritage and the 100th anniversary of Lizzie the elephant coming to the city to work in the steel industry to help with the war effort.

The hard working elephant was employed throughout the First World War by Thomas Ward Ltd to cart heavy loads of steel and machinery through Sheffield’s streets, as all of the city’s horses had been enrolled by the military.

The law firm, which has now grown to have 18 offices nationwide, was originally set up in Sheffield in 1912 – just four years before Lizzie began working in the city.

Sheffield Regional Managing Partner and National Head of Real Estate at Irwin Mitchell, Paul Firth, who is Chairman of The Children’s Hospital Charity, was instrumental in the firm’s involvement with the project.

We’re thrilled to have The Warrior in such a fantastic location, welcoming people as they arrive in the city and bidding them farewell as they leave.

Irwin Mitchell was founded in the city not long before Lizzie worked on the streets of Sheffield so we couldn’t turn down the chance to be part of the project. Just like Lizzie, Irwin Mitchell has played a part in Sheffield’s history and taking part in initiatives like this, which help boost Sheffield’s economy, shows our commitment to the city’s future.

Most importantly The Children’s Hospital Charity is a wonderful cause which looks after poorly children from all over the country on a daily basis, which is why we hope that Herd raises as much money as possible for the Charity. We are looking forward to getting on the trail and we hope everyone else is.