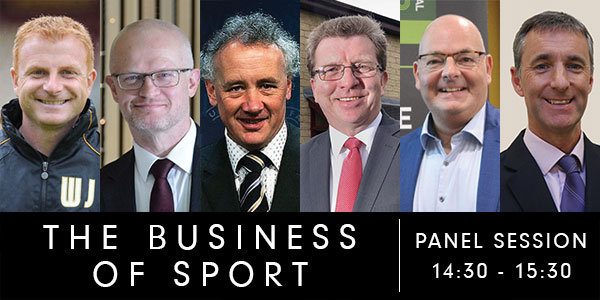 Key players from the sporting world will be looking at the relationship between sport and business at seminar in Bradford.

The YEN Expo 2016 Business of Sport panel will examine the impact of sport on the economy and employment prospects of the region – as well as the very topical and thorny issues currently surrounding the integrity of sport.

The event is one of many sessions taking place at the all-day YEN Expo conference at Bradford College’s David Hockney Building on Tuesday October 25. Delegates will be able to put their own questions to the panel which kicks off at 2.30pm.

The Business of Sport session will be chaired by former Bradford South MP and Sports Minister Gerry Sutcliffe. The panel will include the former Head of the FA Premier League and Chief Executive of Liverpool FC Rick Parry; Bradford City legend Wayne Jacobs – Co-Founder of the One In A Million children’s charity; Yorkshire Sport Foundation CEO Nigel Harrison; and sports law specialist Richard Cramer, a Partner at FrontRow Legal.

Mr Parry worked with Gerry Sutcliffe on integrity issues facing the sporting world when the former MP was serving as Sports Minister and the panel will tackle the subject in the context of the Special Olympics national games in Sheffield next year.

“This is an opportunity to hear from some highly experienced people involved in the business of sport in what promises to be a very lively session. Sport has a massive impact on our economy, providing scope for more investment and employment opportunities as well as the all-important feel-good factor. It is vital, more than ever right now, to maintain the belief in sport. We’d urge everyone with an interest in the debate to come along and put their questions to the panel about this and any other issues they’d like to raise.”

Wayne Jacobs enjoyed 26 memorable years in professional football, both as a player and manager spanning all tiers of English football including Premier League, Championship, League 1 & 2 and the National League. He is now Chair of Active Bradford, a partnership of organisations that helps formulate the strategy for Sport and Physical Activity in the Bradford District. He is Co-founder of One In A Million, a charity which creates pathways in life for youngsters who have faced difficulties, motivating them to take control, be more confident and achieve their full potential. He said:

“Sport has played a major role in my world. It gave me a focus, taught me how to goal set, be disciplined and develop my social skills in order for me to reach my potential. These attributes have all proved transferable in my role as the CEO of a charity that now uses this same power of sport to engage disadvantaged children and young people to prepare them for life and to become work ready.”

The Business of Sport is one of a number of seminars, panel sessions and business clinics at the conference, which attracts around 1,000 delegates and 50 exhibition stands. Formerly known as Bradford Business Conference, the event is in its fifth year and has been rebranded YEN Expo 2016, reflecting the broader reach of the event and Bradford’s re-established standing in the regional business arena.

For further information about the conference or to register free as a delegate visit: www.yenexpo.uk