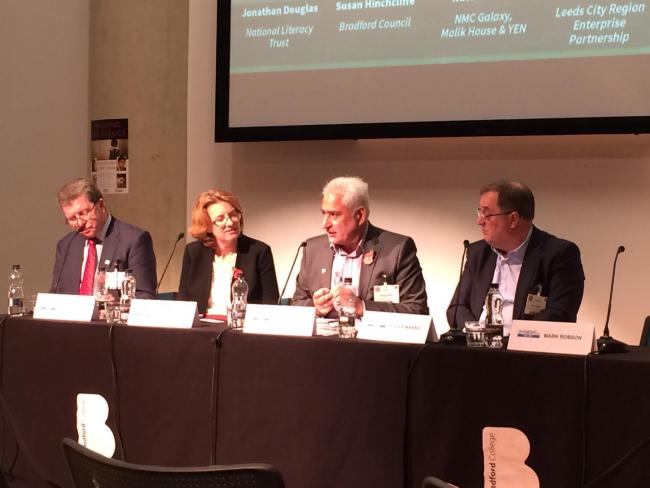 LEADERS from industry, politics and the public sector joined forces to debate Bradford’s future at a major conference yesterday.

The idea of creating a ‘museum of Bradford’, the importance of securing a devolution deal and the opportunities for developing the city centre’s evening economy were just some of the topics discussed at the Yorkshire Enterprise Network’s 2017 Expo.

The conference, billed as the district’s biggest business event, was held at Bradford College with a series of panel discussions running throughout the day.

Mr Ward said the city centre’s resurgence was still a work-in-progress, saying recent research by The Broadway showed that many people to the west of the city were still “going around the city and shopping in Leeds on a weekend”.

He suggested more could be done to get shops to stay open later into the evenings to make the night-time economy seem safer and more appealing.

Ms England spoke of plans to make City Hall more accessible to the public, saying that as well as the police museum on-site and a rugby league museum in the pipeline, they hoped to create a ‘museum of Bradford’.

She said some places, like Bolling Hall or the Bradford Industrial Museum, revealed part of the city’s history but there was nowhere that told its entire story.

Much of the debate centred on the Producer City drive to boost the district’s manufacturing sector and business productivity more widely.

Mr Pervez, who sits on one of its sub-boards, reeled off a list of development plans and business forums Bradford had seen over the past two decades. He said they needed no more grand plans but instead needed the people who sat on such boards to be held accountable for meeting their targets.

He said: “What we need is action and accountability for these people who sit on these boards, whether it’s Producer City or whatever.”

Mr Sutcliffe said it was crucial that Yorkshire secured a devolution deal sooner rather than later.

He warned that if a deal wasn’t secured within the next two years, “it won’t happen”.