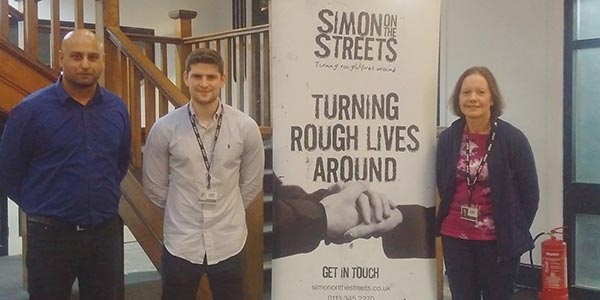 A Leeds charity which helps street sleepers has narrowly avoided being made homeless itself.

Simon on the Streets provides outreach support to rough sleepers, homeless people and others in danger of becoming homeless due to a range of needs such as drug and alcohol dependency and mental health issues. And while its base is in Leeds, it has recently started work in Bradford. But the charity had to issue an urgent cry for help to all its supporters after receiving an eviction notice giving it only two weeks’ to vacate its Leeds office base.

Having a secure base once again means the charitable work in Bradford can continue.

The charity’s development manager Sue Oliver said: “It would have been a real irony if Simon on the Streets had itself become homeless. For a small charity like ours, it was a huge challenge to find affordable new premises in just two weeks without diverting resources from where they are most needed. However, thanks to our supporters and volunteers getting the word out we’ve been able to achieve a really positive outcome and we now have an ideal permanent home.”

“An added bonus for us is that, through Malik House, we can access the support of Yorkshire Enterprise Network which will enable us to reach out to corporates in Bradford and across the county in the same way we have worked very hard to do in Leeds. Once we’d got over the shock of the eviction notice, it seemed the obvious thing to reach out to our supporters for help. The response was tremendous, and the volunteers have also rallied round to help us with the move, so we are all feeling very positive again right now.”

Tom Donegan, the charity’s administration and marketing assistant, said he was amazed at the response to its appeal to find a new base.

“What started out as quite a challenging situation has now turned into an opportunity. Despite such short notice, a rallying call to our supporters resulted in an extraordinary response, providing various suggestions and offers of time and resources to help with the move. We are extremely grateful for all the support we have received and delighted to announce that, against the clock, we have found our perfect new home.”

Sheraz Malik, director of Malik House Business Centres and Yorkshire Enterprise Network, said it was delighted to help the charity in its own hour of need.

He said: “It’s great to be in a position to help such an amazing organisation as Simon on the Streets who do so much good work for the most vulnerable people. It’s fantastic that we now have them housed in one of our buildings which means we’ll be in a good position to forge a close relationship with the charity and support them in various ways through the Yorkshire Enterprise Network.”