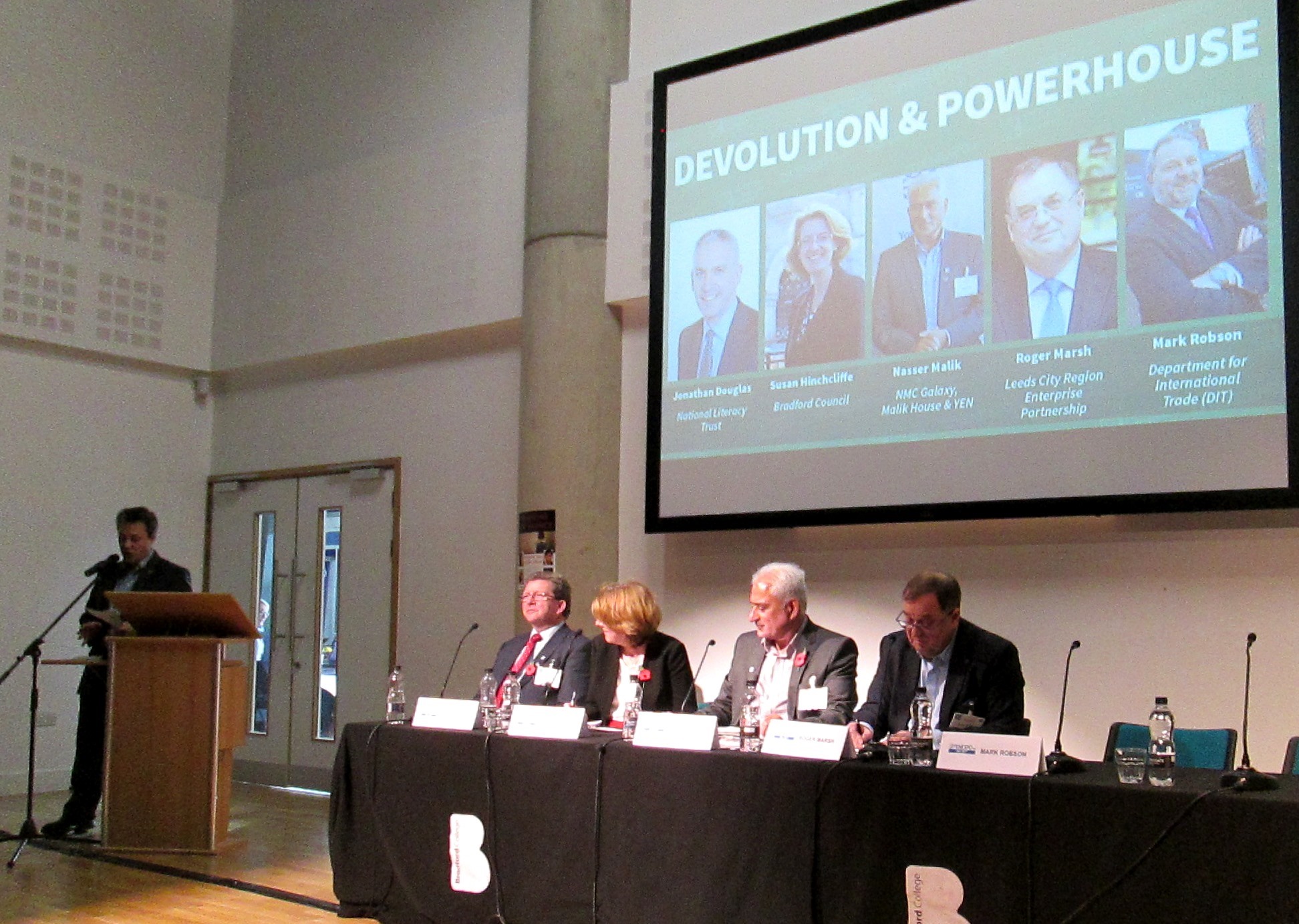 Alongside a range of exhibition stands showcasing around £1 billion worth of industry, services and organisations, delegates were able to benefit from numerous knowledge-transfer sessions, while thorny issues affecting Yorkshire businesses were thrashed out at panel sessions.

Devolution and transport issues were high on the agenda with panel members under pressure from the audience to make faster progress.

The Devolution and Northern Powerhouse session was chaired by Nasser Malik, Chairman of conference organisers YEN – Yorkshire Enterprise Network – and co-hosted by Dermot Bolton of Bradford Politics in the Pub, who added a light-hearted, humorous twist to the introductions.

Bradford Council Leader Susan Hinchcliffe, also chair of West Yorkshire Combined Authority, championed the One Yorkshire Devolution option which, by a show of hands, seemed to be favoured by the panel audience. She stressed that it was important for all the key players to work together rather than “falling out amongst ourselves.”

She said that transport links and education standards remained the main challenges behind stubborn deprivation in the North and that she wanted to move forward as quickly as possible. She said: “Looking towards 2020 when Councils will receive no government grants my heart sinks.”

Chairman of Leeds City Region Enterprise Partnership (LEP) Roger Marsh said the bid for decentralised funding – giving local control of what was effectively “our money” – offered great opportunities. It would enable the Region to ensure that projects delivered the outcomes as well as working to create more and better jobs. But he admitted that “pace continues to be the issue”.

Former Bradford South MP Gerry Sutcliffe described transport links and journey times between Yorkshire and the North West as “ridiculous”. He warned that Westminster was not inclined to favour the North and said he would like to see some interim arrangements in place until a deal was reached. If that didn’t happen in the next two years it never would.

A controversial suggestion from the audience was that electing a Yorkshire Mayor who was not a politician would help to create a united front and prevent delays caused by Party divides.

Another panel, Bradford Beyond 2017, examined the progress of the ongoing renaissance of Bradford city centre – a subject which is revisited by the annual conference year-on-year.

The Broadway Shopping Centre Manager Ian Ward, who is leading on the Bradford BID initiative, wanted to see more done to encourage shops to stay open into the evening to make the city feel safer and more appealing, boosting the night-time economy.

Bradford Council Chief Executive Kersten England talked about plans for a “Museum of Bradford” as well as moves to make City Hall more accessible to the public.

This year’s conference had an interactive focus and featured a Tech Expo, covering everything from BIG Data (tracking and analytics of businesses’ online users and gathering detailed marketing info on them) to GDPR (General Data Protection Regulation) with participants including Google Digital Garage, (the multi-million pound initiative to help businesses develop their digital and online skills) and a seminar on cyber security.

There was business advice on a range of other topics from finance and international trade to Human Resources issues like training, talent management and tackling stress in the workplace.

Also new for 2017 were a Women in Enterprise Village – a dedicated space to promote positive female role models and raise awareness of issues facing women in business – and an Innovation Showcase, where businesses could display their latest upcoming products and ideas. As well as film and television paraphernalia, highlights included 3D printing and textile resources from Bradford College and exhibits by Bradford-based community arts organisation and “arts regeneration mavericks” Brickbox.

They won themselves a free place at the Expo in a YEN Facebook competition with their imaginative exhibition stand, featuring a working hydroponic system and growing microgreens for visitors to taste.

Nasser Malik, (Bradford Business Personality of the Year for 2017), said: “We were delighted to see such a diverse range of businesses and organisations coming together to showcase their products and services, network and share ideas – with mutual benefits not just for individual businesses but also for the wider Yorkshire economy.

“There were some very passionate views put forward at the panel sessions, with a clear appetite for change and urgent progress. We hope the decision-makers and influencers who were present at the debates will take heed of those voices and work to drive forward the initiatives discussed at the greatest achievable pace.

“The Yen Expo is now firmly established as Bradford’s biggest business event and one of the largest in Yorkshire. I’m further delighted to have achieved our objectives and would like to thank all our Partners for helping to make this complex event the success it has been”.

Read the latest news on the Devolution debate here: www.theguardian.com/uk-news/2017/nov/12/one-yorkshire-calls-for-devolution-growing-louder