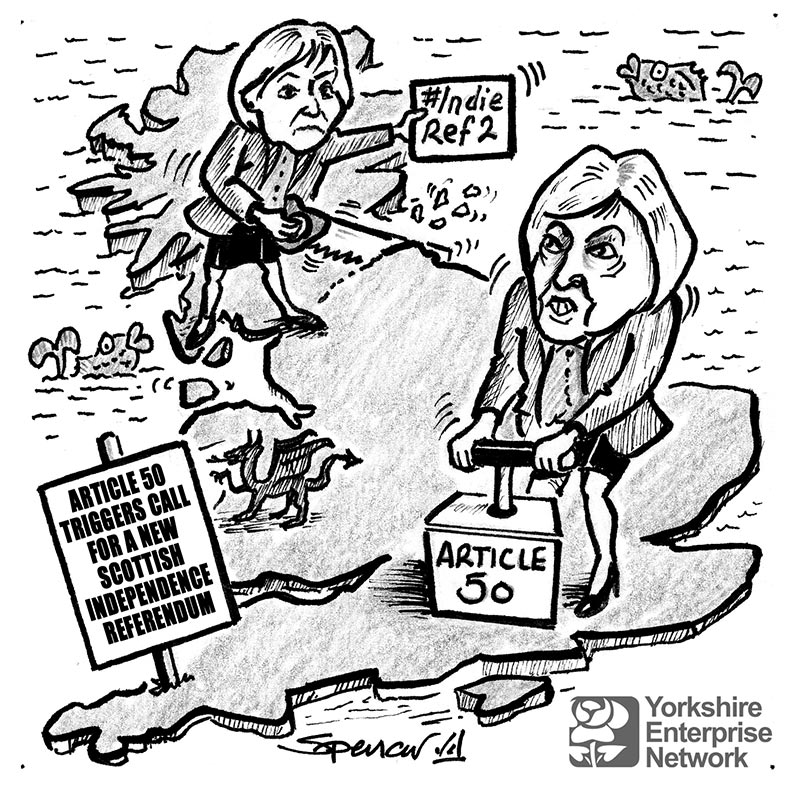 Breaking up’s so hard to do…

The UK and EU’s relationship has been on the rocks for some time and on Wednesday, March 29, 2017 Theresa May filed for divorce. Like many separations, it promises to be acrimonious as the EU threatens to land a £52 billion settlement on the Prime Minister’s table.

Has if Theresa May hadn’t enough on her plate, Scottish First Minister, Nicola Sturgeon now threatens to open up another front by demanding a new Scottish Independence Referendum.
The Scots voted 62% in favour of staying in the EU and now feel aggrieved by the thought they will be dragged into Brexit against their will.

Could Scotland’s call for another referendum re-awaken England’s region’s into pursuing more autonomy from Westminster? There was calls more regional devolution following Scotland’s referendum vote in 2014. Yorkshire has a population slightly higher than that of Scotland’s and an economy twice that of Wales. Something that hadn’t escaped the attention of former chancellor George Osborne, who responded by introducing his ‘Northern Powerhouse’ project in an attempt to appease those calling for devolution for Yorkshire.

David Cameron was so out of touch with the British public, there was no plans drawn up should the EU referendum vote go against him. Hence the uncertainty surrounding Brexit. Triggering Article 50 may not only cut Britain’s ties with the EU, but should the Scots be granted a second referendum after that happens, it could also trigger the breakup of the United Kingdom. It could also trigger calls from the regions to have even greater control of their affairs?