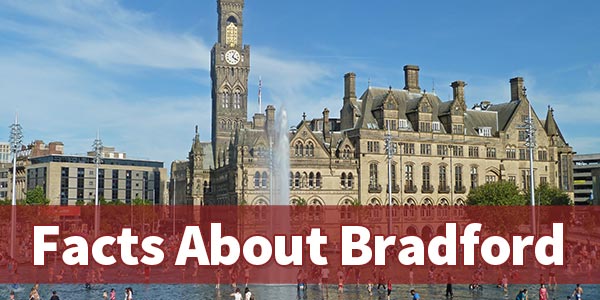 Bradford is no stranger to adversity and it is its resilience that makes it stand out out against other cities in England. It also has many of the gritty characteristics that mark it out as a truly Pennine city, having more in common with the towns of Halifax and Huddersfield than it’s neighbour Leeds.

Bradford is also one of England’s biggest cities ranking fifth (by size of population) behind London, Birmingham, Leeds and Sheffield. For many, visiting the city for the first time, Bradford proves to be a surprising place with many, attractions and a newly emerging leisure scene offering some of the finest craft beers in the country.

Have a look at our top ten list of facts. We’re sure you’ll be amazed.

Every year a national competition is held to see who makes the best curries in Britain. Judges score four restaurants selected by the local council that are judged on many different specific features about the dish itself and its presentation. Even hygiene comes into the equation! After all the judging is done it’s become the norm for Bradford to come out on top!

Bradford has been named Curry Capital of Britain for a record breaking five years in a row. The city gets praises from the judges for holding several curry themed events, including a poppadom eating challenge. The four Bradford restaurants selected to represent Bradford are The Aakash, Kipling’s, Shimla Spice and Akbar’s.

#9 – The King of UK Water fountains

Bradford City Park is a public space in the centre of Bradford, situated close to the Grade 1 listed Bradford City Hall. City Park was originally conceived as part of a master plan for a city centre regeneration project which first began in 2003.

The main feature of the park is the mirror pool which contains the highest fountain in any British city, shooting water up to 100ft into the air. In addition, there are more than 100 smaller fountains, laser light projectors and loudspeakers.

Designed by Lockwood and Mawson for Sir Titus Salt in 1853, Salts Mill is now used as an art gallery, shopping centre and restaurant complex. The Mill has many paintings by local artist David Hockney on display and also provides offices for Pace plc.

When completed, the former textile mill was the largest industrial building in the world by total floor area but sadly closed in 1986. The following year the Grade II listed building was bought by Jonathan Silver who began a long renovation scheme. Sadly Jonathan Silver died of cancer in 1997, but his vision and entrepreneurial prowess saved this beautiful building for future generations. By transforming Salt’s Mill into a living cultural, retail and business centre, Silver laid paved the way for Saltaire becoming a UNESCO World Heritage Site in 2001.

Bradford is experiencing the biggest population boom in the country (if you don’t include London). It has the largest proportion of under fives as well as under 19-year-olds, and also the biggest average household size.

Bradford overall population count has increased by 11 percent from 470,800 in 2001 to 522,500 according to information taken from the last census held in 2011. When the next census comes out in 2021 Bradford will show a massive increase in its general population and also the average age.

Opened August 29th 1853, St George’s Hall is the oldest concert hall still in use in the United Kingdom and the third oldest in the whole of Europe. A Grade II listed Victorian building, it was originally designed with a seating capacity of 3,500, but currently seats 1,500 people. The building was financed by German Jewish wool merchants who had moved to Bradford because of the textile industry and it is said Jacob Moser (Lord Mayor in 1910) was instrumental in its construction.

The design was thought up in a competition, where twenty-two designs were submitted and the design by Henry Francis Lockwood and William Mawson was chosen. Having celebrated its 160th anniversary in 2013 the hall closed in March 2016 so that a £4 million pound restoration scheme could go ahead. St George’s Hall will open up once again in 2018 after the renovations and interior refurbishment is complete.

Jowett was a manufacturer of light cars and light commercial vehicles based in Bradford. Jowett was founded in 1906 by the Benjamin Brothers, and when the business first started they made peddle bikes, later going on to build V twin engines for driving machinery. In 1904 they became Jowett Motors and started making their first light cars.

Over the next 50 years, Jowett made cars exclusively in Bradford. Over this time there were many different models of cars, all made in the Bradford area. The company survived both world wars but after a few years of financial problems Jowett was forced to sell in 1954 bringing to an end car manufacturing in the city.

The Alhambra theatre based in the centre of Bradford and is well known by theatre goers. Named after the Alhambra Palace in Granada, Spain which was the residence of the Emirate of Granada when the Moors ruled the Iberian Peninsula for 700 years between 711 AD and the fall of Granada in 1492.

The vision of local impresario, Francis Laidler, the building itself was built in 1913 at a cost of £20,000 and opened on March 18, 1914. It has seen some of the big names of stage and screen such as Laurel & Hardy, George Formby, Morecambe & Wise, Peter Sellers, Frankie Howerd and Rik Mayall treading its boards. In 1964 Bradford City Council bought the Alhambra for £78,900 and in 1974, it was awarded Grade II listed building status. The most dramatic changes to the theatre came in 1984 when the frontage was completely rebuilt and refurbished. Often regarded as one of the finest theatres in England, the Alhambra now plays host to large scale touring theatre companies of all types with a seating capacity of 1,456.

The Bradford Pals were three of the many pals battalions of Kitchener’s Army raised in the city during the First World War. Following basic training, the three pals battalions were taken over by the British Army and officially named the 16th, 18th and 20th battalions, of the Prince of Wales Own West Yorkshire Regiment.

On the morning of July 1, 1916, an estimated 1,394 young men from the Bradford Pals left their trenches in Northern France to advance across No Man’s Land during the Battle of the Somme. Of the 1,394 men who left the trenches 1,060 were either killed or wounded within the first hour of their ill fated attack on the village of Serre.

During the nineteenth century, Bradford rose to prominence as an international centre for textile manufacture, particularly wool. It was a boomtown of the industrial revolution, and amongst the earliest industrialised settlements, rapidly becoming the wool capital of the world. As textile manufacturing grew it led to an explosion in population and investment.

This investment can still be seen today as it was wool money that leads to Bradford City Hall and the neo-classical warehouses of Little Germany being built. In more modern times Bradford’s textile sector has declined with production being moved abroad. There are, however, many reminders around Bradford of this rich past with buildings such as Salts Mill and Lister’s Manningham Mills still seen as major landmarks of in the city.

In 2009 Bradford beat Los Angeles, Cannes and Venice to become the world’s first UNESCO City of Film. A title bestowed upon Bradford for its long associations with film and filmmaking, dating back to the very beginning of the cinema. It has been acknowledged by the film industry as a film friendly city. In addition to their film history, Bradford boasts a number of film festivals and film related events.

The way a city is recognised as a UNESCO is to be a ‘Creative Hub’ promoting socio-economic and cultural development both in the developed and the developing world through creative industries. Also for creating ‘socio-cultural clusters’ connecting socio-culturally diverse communities to create a healthy urban environment.