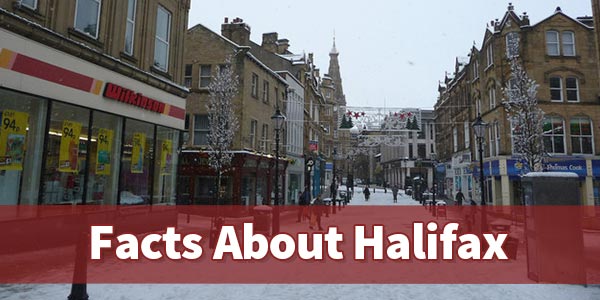 The Halifax Piece Hall is a magnificent 18th century building in the heart of Halifax. Its original purpose was to enable woollen handloom weavers to sell their ‘pieces’ to merchants who travelled far and wide for the high quality cloth. It first opened for business on January 1, 1779, with over 300 separate rooms arranged around a central courtyard. With the advent of steam powered woollen mills in the 19th century handloom weavers went into decline. Some diversified and around 1815 the rules were changed to allow the sale of cotton goods.

The Wainhouse Tower is a folly in the parish of King’s Cross, on the South West side of Halifax. At 275 feet it is the tallest structure in Calderdale and the tallest folly in the world. It was originally built as a chimney for a local dye works by John Edward Wainhouse in the late 19th century but was never used in that capacity. The main shaft is octagonal in shape and it has square base with 403 steps leading to the viewing gallery at the top. The Grade 2 listed building is open to the public during bank holidays.

Shirley Crabtree, better known as Big Daddy,was a professional wrestler famous for his record breaking 64 inch chest. He was born in Halifax and was a former rugby league player, worked as a coal miner and a lifeguard before becoming a professional wrestler in 1952.After he retired, he spent most of his days in Halifax. In 1997 he died of a stroke at the age of 67. His grandson, Eorl Crabtree, currently plays for Huddersfield Giants RLFC.

On Tuesday June 17 1913 a quiet Siddal street was suddenly thrown into confusion and panic. Passers by scattered in all directions, ducking into available doorways and diving behind stalls. For running up Jubilee Street was a Canadian Grizzly Bear. The massive creature had escaped from Halifax Zoo which has since closed. It charged on heading into Elland Wood where it remained on the loose for nearly two hours as zoo staff hunted high and low for it. It was finally caught when it ran into a trap on the Canal Bottom.

Born in Halifax, Lister emigrated with his family in 1884 to America to be near his uncle who was mayor of Tacoma, Washington. After his move he started working at his brothers foundry in Tacoma. He then got elected onto the Tacoma City Council and after a successful management of governor John Rankin Rogers campaign, Lister was appointed Chairman of the State Board of Control. 27 years later Lister became the elected Democrat in Washington’s executive branch of government and became the 8th Governor of Washington. He died six years later whilst in his second term in 1919.

Eureka The National Children’s Museum is an interactive educational museum that is located in Halifax. It focus on learning through play. It is run as an educational charity and not for profit organisation. Eureka is based on the North American model of children’s museums. Aimed at families with children aged 0 – 11 and encourages hands on inter-generational learning.

John Mackintosh and his wife, Violet, opened a toffee shop in King Cross lane in 1890. Violet formulated the toffee’s recipe. John became known as the ‘toffee king’. A factory was opened on Queens Road in 1898. And a new factory at Albion Mill, at the current site near the railway station, followed in 1909. John died in 1920, and his son Harold not only continued the business, but took it to the present size and range of confectionery it has today. Their famous brands, including Rolo, Toffee Crisp and Quality Street of Chocolate and Confectionery are not just popular in the UK but around the world including the USA.

Dean Clough in Halifax is a large mill complex originally built in the 1840s to 1860s for Crossley’s Carpets. At the time it was the world’s largest carpet factory at half a mile long with 1,250,000 square feet of floor space. After years of decline the production of carpets came to a close. It then was bought by a consortium led by Sir Ernest Hall which developed the Grade 2 listed site for various commercial and cultural uses.

In 1834, the Palace of Westminster in London was destroyed by a great fire, so a public competition was held to find a new design for the ‘home of Parliament’. Out of 90 architects, Charles Barry was chosen as the overall winner, and over next number years he worked to create the Houses of Parliament. In 1848 a corporation met in the old assembly room in Halifax to plan the new town hall. A number of designs were put forward on how the town hall should look, but
the panel decided to consult Sir Charles Barry who had since been knighted. Unsurprisingly he proposed a design his own, which was accepted.

When the French carried out their first execution by guillotine in 1792, they may not have known they were 505 years late to claim being first to use such a contraption? The Halifax Gibbet was a forerunner of the guillotine and is said to have dispatched a certain John of Dalton in 1286. By 1541 those caught committing a crime would most certainly have to face the gibbet. Executions would usually be held on a market day to dissuade others from following a path of crime. A replica of the gibbet can be seen on Gibbet Street today.