Henderson’s Relish, known locally as Hendo’s, ‘Hendies’ or ‘Enderson’s’, is a spicy and fruity condiment, similar in appearance to Worcestershire sauce, but contains no anchovies. It is essentially made of water, sugar and spirit vinegar with a selection of spices and colouring. Some adherents favour it due to its unique taste, and some out of regional loyalty. 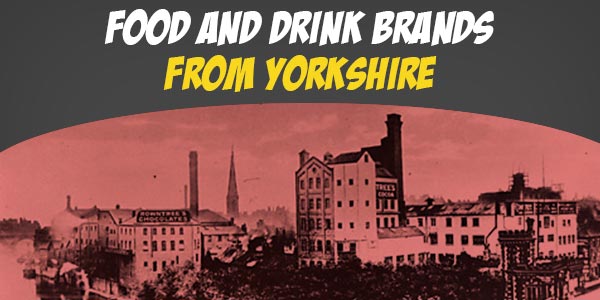 It was Henry Henderson who first began manufacturing his own special type of sauce back in the latter part of the 19th century. Originally manufactured at 35 Broad Lane in Sheffield, Henderson’s Relish is still being made and was in uninterrupted production within half a mile of the site from which the first bottle was filled until the move to a new food production factory in 2013. In 1940 Charles Hinksman formed the present company of Hendersons (Sheffield) Ltd., the control of which has remained with the family. Kenneth Freeman, became the Managing Director and Chairman in 1991 and has overseen many important changes in the company’s profile.

It is produced in Sheffield, South Yorkshire. The product’s slogan is, “Made in Sheffield for over a 100 years”.

John Smith’s Brewery in Tadcaster, North Yorkshire, England, produces beers including John Smith’s, the biggest selling bitter in the United Kingdom since the mid-1990s. The majority of John Smith’s sales are of the nitrogenated Extra Smooth product, although a cask conditioned variant is available nationally. A stronger variant called Magnet is also available.

With a 3.8 million hectolitre capacity, the brewery is one of the largest in the country (1.8 million of which is John Smith’s beer). It currently employs around 300 people in 2008. It has two keg lines, two bottle lines and one canning line. It currently brews and packages the ale brands John Smith’s Original, John Smith’s Extra Smooth and Newcastle Brown Ale, and the lager brands Foster’s, Kronenbourg 1664, Amstel and Tiger.

Seabrook Crisps is a brand of crisps produced in Bradford, West Yorkshire. The company was founded in 1945 by Charles Brook, and the name arose because of an error in a photo-processing shop; instead of writing “C. Brook” on a film, a clerk wrote “Seabrook”. Seabrook’s crisps are distributed widely in the north of England, and increasingly in the south, and are also sold through mail order.

In the 1980s the company introduced sunflower oil to the cooking process, and in 2007 was the first crisp brand to remove MSG from all its crisps. In 2011 Seabrook Crisps launched its Goodbye salt Hello flavour range under a tagline “with at least 90% less salt, but 100% great taste”, in line with government objectives to lower salt intake. The salt was substituted with sugar. Seabrook was the first company to produce Worcester Sauce flavored crisps.

The party ring is a British biscuit first made by Fox’s Biscuits in 1983. It is a circular biscuit with a central finger-sized hole. On top of this is a layer of hard coloured icing with “wiggly” lines in a different colour. Party rings were a product of the 1980s fashion for the newly developed chemical food dye system. This made them a very popular choice for children’s parties.

The crisp, hard sheen on the icing is because of the use of carob bean gum – the carob, or locust bean, is also sometimes used as a chocolate substitute.

Terry’s Chocolate Orange is a chocolate product created by Terry’s in 1932 at the Chocolate Works factory in York, North Yorkshire. The Terry’s Chocolate Orange comprises an orange-shaped ball of chocolate mixed with orange oil, divided into 20 “segments”, similar to a real orange, and wrapped in orange-skin patterned foil. As the segments, when packaged, are stuck together firmly in the centre, the traditional method of getting ready to eat them is: prior to unwrapping the ball, to tap it severely on a hard surface to cause the segments to separate from each other (dubbed “Tap and Unwrap” or “Whack and Unwrap”).

The company opened the Art Deco-style factory The Chocolate Works in 1926, began launching new products. The first was the Chocolate Apple (1926), then the Chocolate Orange (1931), and finally Terry’s All Gold (1936). In the North American market, where it has had a variety of importers over the years, it was briefly sold as a Tobler (maker of the Toblerone) product.

Polo Mints are a brand of mints whose defining feature is the hole in the middle. The peppermint flavoured polo was first manufactured in the United Kingdom in 1948 by employee John Bargewell at the Rowntree’s Factory, York, and a range of flavours followed. The name derives from “polar”, referencing the cool and fresh taste of the mint.

Polo mints were developed by Rowntree’s in 1939, similar to the US confectionery Life Savers and the British Navy Sweets, but their introduction to the market was delayed until 1947 by the onset of the Second World War. Polo fruits followed soon after.

In 1822, brothers Joseph and Edward Tetley sold salt from a pack horse in Yorkshire. They started to sell tea and the venture became such a success that they set up as tea merchants “Joseph Tetley & Co.” in 1837. They relocated to London in 1856 and set up “Joseph Tetley & Company, Wholesale Tea Dealers”. It was the first company to sell tea in tea-bags in the United Kingdom in 1953.

Yorkshire Tea is a black tea blend produced by The Bettys & Taylors Group. It is the third most popular tea brand in the UK, and was introduced in 1886 by Charles Edward Taylor. Founded as CE Taylor & Co., later shortened to “Taylor’s”, the company was purchased by rival ‘Betty’s Tea Rooms’ which today forms The Bettys & Taylors Group. Taylor’s is still based in Harrogate, Yorkshire, in the first ‘Betty’s’ tea room.

The group is still owned by the founder of Betty’s’ family, Fredrick Belmont and is currently chaired by Lesley Wild. The company is one of the few remaining family tea and coffee merchants in the country. Yorkshire Tea is now the third most purchased tea brand in the UK, despite selling less volume worldwide compared to Tetley’s Tea, their pride in Yorkshire has helped it to become an international symbol for the region.

Rowntrees of York, England, have been making “Chocolate Beans” since at least 1882. The product was renamed “Smarties Chocolate Beans” in 1937. Rowntrees was forced to drop the words “chocolate beans” in 1937 due to trading standards requirements, so adopted the “Milk Chocolate in a Crisp Sugar Shell”. Later, the sweet was rebranded as “Smarties”.

Smarties are a colour-varied sugar-coated chocolate confectionery popular primarily in the UK, Canada, Australia, New Zealand and much of Europe. They have been manufactured since 1937, originally by H.I. Rowntree & Company in the UK. They are currently produced by Nestlé.

Smarties are oblate spheroids with a minor axis of about 5 mm (0.2 in) and a major axis of about 12 mm (0.5 in). They come in eight colours: red, orange, yellow, green, blue, mauve, pink and brown, although the blue variety was temporarily replaced by a white variety in some countries, while an alternative natural colouring dye of the blue colour was being researched.

Kit Kat is a chocolate-covered wafer biscuit bar confection created by Rowntree’s of York, England, and is now produced globally by Nestlé, which acquired Rowntree in 1988, with the exception of the United States where it is made under license by H.B. Reese Candy Company, a division of The Hershey Company. The standard bars consist of two or four fingers composed of three layers of wafer, separated and covered by an outer layer of chocolate. Each finger can be snapped from the bar separately.

Many varieties of Kit Kat have existed, either permanently or as limited editions, such as those sold to commemorate festivals such as St. Valentine’s Day. In Japan, Nestlé has introduced over 200 different flavours since 2000, including ginger ale, soy sauce, creme brulee, green tea, and banana. The flavours are designed to appeal to younger buyers, and are often bought as good-luck gifts as the brand name echoes the Japanese phrase “Kitto Katsu”, roughly translating as “surely win.”