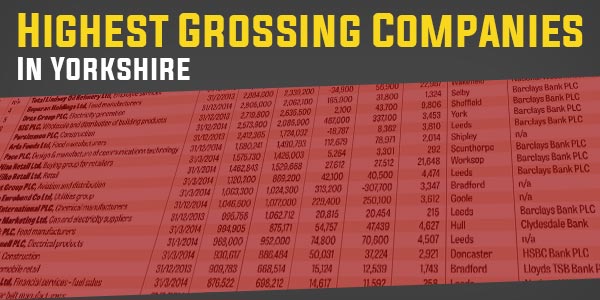 In 2015, the combined turnover of Yorkshire’s top 250 businesses increased by over 10% in 2015 to a massive £118.6 billion. Total pre-tax profits also increased by just under 9% to £4.46 billion in the same period, making for a strong return for investors in our region.

These numbers highlight the strong recovery that Yorkshire’s top companies have made since last decade’s recession. It also shows the importance of Yorkshire’s top corporations in providing prosperity in the north of England and a strong pillar towards building the Northern Powerhouse.

Kelda Group is a British utility company. It is based in Bradford, West Yorkshire. It was formerly listed on the London Stock Exchange and a constituent of the FTSE 100 Index, but was taken private by a group of investors, Saltaire Water, in 2008. Saltaire Water members include CitiBank and HSBC Holdings.

Kelda Group, originally known as Yorkshire Water plc, was one of the regional water companies privatised in 1989. It was taken private in a £3.04 billion deal in February 2008 by Saltaire Water, a consortium of investment companies including Citigroup and HSBC. Yorkshire Water remains its principal UK business. It provides water to several million people in northern England, mainly in the catchment area of the River Ouse.

Dart Group PLC is a holding company based in Leeds, West Yorkshire, for an airline company historically linked with the Channel Islands and a distribution company based in Lincolnshire. Its head office is located in the Low Fare Finder House on the grounds of Leeds/Bradford Airport, Yeadon, Leeds. Subsidiary Jet2.com has its head office in the same building.

In 2002, four Boeing 737 aircraft were purchased with two becoming 737 QC (Quick change) aircraft and two as passenger aircraft. From February 2003, the Jet2 low-cost airline began flying from Leeds-Bradford Airport to mainland Europe destinations. In the following years, they would buy more commercial jets and forn a package holiday company called Jet2holidays.com in 2007.

In 1998 the company started shipping digital satellite television equipment for BSkyB. In 1999, Pace purchased the set-top box division of Acorn Computers and converted it into its Cambridge office. In the following years Pace owned the GUI RISC OS, and used technologies based on it in its decoder equipment. Pace started delivering products to Comcast in the United States in 2000; the company also delivers to AT&T and DirecTV. In 2001 Pace announced that it was outsourcing the last of the manufacturing capacity which remained at its location in Saltaire: the head office was reduced to an administration and development centre.

The parent company Arla Foods amba initially held a 51% stake, but acquired the rest of the company’s shares in April 2007. In Britain, Arla supplies milk to retailers and produces many household brands such as Lurpak, Anchor Butter, Cravendale, Lactofree and Castello.

Persimmon plc is a British housebuilding company, headquartered in York, England. The Company is named after a horse which won the 1896 Derby and St. Leger for the Prince of Wales. It is listed on the London Stock Exchange and is a former constituent of the FTSE 100 Index. Persimmon was founded by Duncan Davidson in 1972. After leaving George Wimpey, Davidson had formed Ryedale Homes in 1965, selling it to Comben Homes in 1972 for £600,000. Davidson restarted development again in the Yorkshire area; Persimmon began to expand regionally with the formation of an Anglian division in 1976 followed by operations in the midlands and the south-west.

In January 2006 Persimmon acquired Westbury, another listed UK house builder, for a total consideration of £643 million.

SIG PLC is a Yorkshire-based international supplier of insulation, roofing, commercial interiors and specialist construction products. It is listed on the London Stock Exchange and is a constituent of the FTSE 250 Index. The Company was founded by Ernest Adsetts in 1957 Sheffield as ‘Sheffield Insulations Limited’. His son Norman Adsetts joined the firm in 1966 becoming Managing Director in 1970 and then Chairman in 1985. The Company was first listed on the London Stock Exchange in 1989 when it became Sheffield Insulations Group plc.

In 2004 the Company bought Orion Trent Insulation, another UK distributor, with Leaderflush Shapland (formerly LS Group), a manufacturer of door sets for hospitals following in 2005. It bought Wodan and WIG in Poland and exited the USA in 2006. The acquisition of Lariviere came in 2007, allowing the Company to enter the French roofing market. Also in 2007 General Fixings, based in Bristol, was acquired. Also in 2007, SIG moved into the refractory business, by purchasing MacGregor and Moir, one of the UK and Europe’s leading specialists of high temperature insulation and refractory solutions.

Drax Group PLC is a British electrical power generation company that specialises in renewable, reliable, affordable energy. The Group is made up of upstream and downstream enterprises. The principal downstream enterprises are based in the UK and include Drax Power Limited, which runs Europe’s biggest biomass-fuelled power station, Drax power station, near Selby in North Yorkshire – the UK’s largest decarbonisation project, as well as supplying between 7-8 per cent of the country’s electricity needs.

Related businesses include Haven Energy, a supplier of sustainable biomass energy to business, and Billington Bioenergy, a supplier of sustainable wood pellets for domestic biomass energy systems. The group’s largest upstream enterprises are Drax Biomass, which sources sustainable biomass for Drax power station and Baton Rouge Transit, which handles storage and transport of finished biomass pellets from the Port of Baton Rouge, Louisiana. The company is listed on the London Stock Exchange and is a constituent of the FTSE 250 Index.

Boparan Holdings is the group company, which owns all of the couple’s subsidiary holdings. They are proud of the high standards of animal welfare and food safety among their partner companies and suppliers.

One of these companies is Northern Foods, which is a British food manufacturer based in Leeds. On 21st January 2011 Ranjit Singh Boparan announced a bid to buy Northern Foods,[4] which succeeded in gaining sufficient shareholder support to proceed, resulting in the appointment of Boparan as the company’s chairman in April 2011. Northern Food provides for many different brands such as Goodfella’s Pizza, Fox’s Biscuits, Holland’s Pies and many others.

Morrisons is the fourth largest chain of supermarkets in the United Kingdom, founded and headquartered in Bradford, West Yorkshire. Founded in 1899 by William Morrison, hence the abbreviation Wm Morrison, it began as an egg and butter stall in Rawson Market, Bradford, England. Until 2004, Morrisons store locations were primarily focused in the north of England, but with the takeover of Safeway in that year, the company’s presence increased significantly in the south of England, Wales and Scotland. As of May 2014 the company had 515 superstores and 113 Morrisons M local stores spread across England, Wales and Scotland.

The Morrison family currently owns around 10% of the company, and it is also listed on the London Stock Exchange and is part of the FTSE 100 Index of companies.

Asda Stores Limited is an American-owned, British-founded supermarket retailer, headquartered in Leeds, West Yorkshire. The company became a subsidiary of the American retail corporate giant Walmart after a £6.7 billion takeover in July 1999, and was the second-largest supermarket chain in Britain between 2003 and 2014, by market share.

Besides its core supermarket retail format, the company also offers a number of other products, including financial services and a mobile phone company using the existing network of EE. Asda’s marketing promotions are usually based solely on price, and like its parent company, Walmart, Asda promotes itself under the slogan “Save Money. Live Better”.