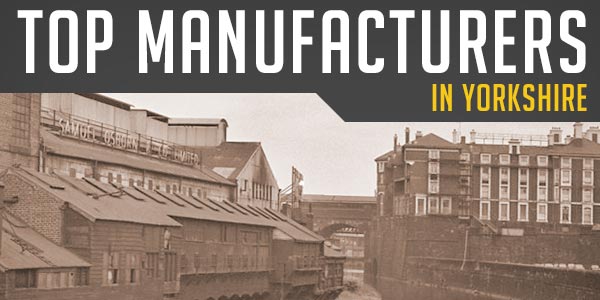 The Industrial Revolution brought many changes to the Yorkshire landscape and lives of those who lived here. Goods that took many hours to make and were high in cost became mass produced and within reach of many of the population. It was also a time of invention with industrialists pressing for new ways to improve and speed up production.

This period of growth gave rise to many new products and brands that became family names such as Rowntree’s, Terry’s of York, Joshua Tetley & Son Ltd, Basset’s, John Smith’s, Henderson’s Relish and Fox’s Biscuits. Some of these iconic names were bought by multinational companies like Nestle, but the produces that were created here still live on and are enjoyed the world over.

Northern Foods Ltd was a British food manufacturer headquartered in Leeds. It was formerly listed on the London Stock Exchange and was a constituent of the FTSE SmallCap Index. The company was scheduled to merge with Greencore Group in 2011 to form Essenta Foods, the group being headquartered in Dublin, and listed on the FTSE.

On 21 January 2011 Ranjit Singh Boparan announced a bid to buy Northern Foods, which succeeded in gaining sufficient shareholder support to proceed, resulting in the appointment of Boparan as the company’s chairman in April 2011. The company has many different factories in Yorkshire that make a number of different foods, such as Goodfella’s Pizza, Fox’s Biscuits and Holland’s Pies.

Arla Foods UK Limited is a major dairy products company in the United Kingdom, based in Leeds, and a subsidiary of the Swedish-Danish Arla Foods Group. Arla is the UK’s largest supplier of fresh milk and cream, producing over 2.2 billion litres of milk every year.

It produces two premium milk brands – Cravendale filtered milk, which undergoes a filtration process to remove bacteria before pasteurization; and Lactofree milk, from which lactose is removed, making it suitable for most lactose intolerant people. Following the success of Lactofree milk, Arla introduced a range of Lactose free products, including cheese and yoghurt.

The company has many different processing plants in England, two of which are located in Yorkshire. One in Stourton (Leeds) and the other being in Settle; they produce all of their products at these sites.

Fenner plc is a leading British-based manufacturer of industrial belting and other polymer-based products. It is headquartered in Hessle and is listed on the London Stock Exchange. They are known to be a world leader in reinforced polymer technology, which is used in many different industrial work sectors such as Energy, Transportation, Medical, Agriculture and Construction Equipment.

Fenner have two plants in Yorkshire, the Fenner Dunlop ECS in Hull, which is the world’s leading manufacturer of solid woven, fire retardant conveyor belting for underground mining and industrial applications. The second is the Norwegian SEALS LTD, which is located in Leeds, they are an industry leader in manufacturing custom components for oil and gas OEMs and service companies.

Siemens-VAI based in Linz, Austria, was an engineering and plant building company for the iron and steel industry, for the flat-rolling sector of the aluminum industry and for open cast mining. It was one of the branches of Siemens Industrial Solutions and focused on metallurgical services.

Siemens have one plant located in Sheffield, South Yorkshire. It’s main purpose is to make foil rolling mills, but it is also uses its blast furnaces to produce various alloys and metals that are then utilised by other industries as materials for construction.

Cranswick’s core market is the UK but the company has a rapidly developing export business serving the European, US and South East Asian markets. Cranswick have several plants in Yorkshire such as their plant in Malton, North Yorkshire which makes gourmet pastries. They also have a plant in Barnsley that prepares fresh pork. However, their main operations in Yorkshire is located in Hull, where they prepare fresh pork, cooked meats and sausages for all of the company’s brands.

Nestlé S.A. is a Swiss transnational food and beverage company headquartered in Vevey, Vaud, Switzerland. It is the largest food company in the world measured by revenues, and ranked #72 on the Fortune Global 500 in 2014. Nestlé’s products include baby food, medical food, bottled water, breakfast cereals, coffee and tea, confectionery, dairy products and ice cream, as well as owning brands such as Nespresso, Nescafé, Kit Kat, Smarties and Nesquik.

Nestlé has 447 factories, operates in 194 countries, and employs around 339,000 people. Two of these factories are located in Yorkshire. Halifax and York both have Nestlé factories producing a number of Nestlé products for the UK market, such as chocolates and dairy products. York even has a distribution centre to store all the products before moving them around the United Kingdom.

Tata Steel Europe Ltd. is a steelmaking company headquartered in London, United Kingdom, with its main operations in the United Kingdom and the Netherlands. Corus Group was formed through the merger of Koninklijke Hoogovens and British Steel in 1999 and was a constituent of the FTSE 100 Index. It was acquired by Tata of India in 2007, and renamed Tata Steel Europe in September 2010.

Tata Steel Europe has a scrap fed mini mill complex in Rotherham, here they make alloy and special steels, and engineering steels are rolled at the Rotherham Works. Also, ultra pure remelted steels are made at the nearby Stockbridge Works. These metals are used across Europe for many different purposes such as building structures and manufacturing car parts.

Smith & Nephew plc is a British-based multinational medical equipment manufacturing company headquartered in London. It is an international producer of arthroscopy products, advanced wound management products, trauma and clinical therapy products and orthopedic reconstruction products. Its products are sold in over 90 countries and they employ a total of 14,000 staff.

Smith & Nephew operates in three market segments through separate Global Business Units under the Smith & Nephew brand name. The Advanced Wound management who design advanced treatments for difficulty is based in Hull, producing medicines for different illnesses that are then distributed across the world.

In Saltend near Hull, BP operates a petrochemicals plant that produces acetic acid and acetic anhydride used in the production of pharmaceuticals, textiles and other chemical products. At the same location, the company operates a biofuel technology demonstration plant in partnership with DuPont, which uses feedstock such as wheat to produce biobutanol.

Coca Cola have factories in most countries around the world, with six being located in Britain, one of which is located in Yorkshire. The Wakefield Coca-Cola factory is the largest soft drinks plant in Europe (by volume produced), manufacturing and distributing in excess of 100 million drink cases per annum. They claim that they can produce 6,000 cans of soft drink every minute, that’s 100 per second. The site itself is located in a building that covers an area the size of 16 football pitches.