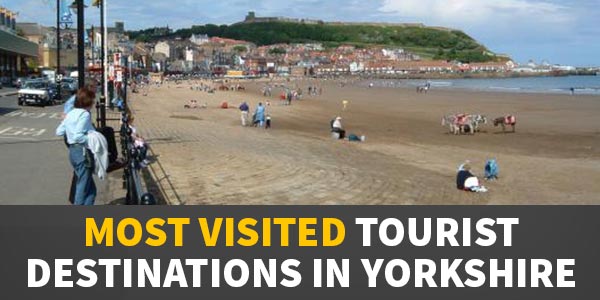 In 1626 while walking on the beach near Scarborough’s south cliffs, a certain Elizabeth Farrow discovered a stream of mineral water. Soon Scarborough became known as a spa town. Following the publication of a book on spa waters by Dr. Wittie in 1660, Scarborough began attracting more visitors making it Britain’s first seaside resort.

Rich in heritage, culture and attractions, Yorkshire’s tourist destinations generate around £6.3 billion towards the county’s annual economy. Our compilation of Yorkshire’s leading destinations may surprise you and hopefully lead to a great family day out.

Doncaster Museum and Art Gallery is the town’s main museum. It opened in 1964, and explores natural history, archaeology, local history, and fine and decorative art. It has a major exhibit dedicated to silverware and trophies won at Doncaster Racecourse. The museum houses the Regimental Museum of the King’s Own Yorkshire Light Infantry. The aircraft museum Aeroventure is based on the site of the former site of RAF Doncaster at Doncaster Lakeside. The Trolleybus Museum in the nearby village of Sandtoft specialises in the preservation of trolleybuses, and claims to have the largest collection of preserved trolleybuses in Europe, with over 60 examples.

There are events and concert that take place at Doncaster Racecourse and The Dome Leisure Centre. Cast is the new £22 million venue opened officially on Monday 2 September 2013. Cast includes a 620-seat auditorium, a flexible studio space, drama studio, dance studio, education and ancillary space. Doncaster nightlife consist of the Silver Street, Cleveland Street and High Street areas have over 40 bars and clubs within a 2-3 minute walk of each other and other bars can be found on Priory Walk, Lazarus Court, Bradford Row and around the Market Place.

The annual heritage event Skipton Sheep Day which takes place on the first Sunday in July on Skipton High Street and showcases what Skipton and the Yorkshire Dales has to offer with demonstrations, stalls, entertainment and food on offer. The town hall in Skipton holds regular craft fairs and special events and also houses the Craven Museum & Gallery as well as a tourist information centre.

Skipton has numerous public houses, two nightclubs (within one building), and restaurants including traditional fish and chips, modern British, American, French, Mexican, Indian, Chinese and Italian. In March 2014 The Sunday Times judged Skipton as the “best place to live” because of its proximity to the Yorkshire Dales, it’s great schooling and its independent shops along a ‘buzzing’ high street.

Bridlington is a coastal town and civil parish on the Holderness Coast of the North Sea, situated in the county of the East Yorkshire approximately 24 miles (39 km) north of Kingston upon Hull. Bridlington is a minor sea fishing port with a working harbour and is well known for its shellfish. It has a mix of small businesses across the manufacturing, retail and service sectors with its prime trade being tourism during the summer months.

The Bridlington Spa was originally opened in 1896, in its heyday Bridlington was a leading entertainment resort thanks to this nationally-famous dance venue where many well-known entertainers appeared, including David Bowie & Morrissey. It has since again begun to attract ‘big’ names from the world of entertainment: in 2013 Indie Rock bands The Kaiser Chiefs and Kasabian, Irish band The Script and Joe McElderry all performed at the venue, attracting large crowds.

Harrogate has a strong and varied economy. The conference and exhibition industry is the focus of the town’s business, with Harrogate International Centre the third largest fully integrated conference and exhibition centre in the UK, and one of the largest in Europe. It brings in over £150 million to the local economy every year and attracts in excess of 350,000 business visitors annually. Eating out is popular in Harrogate, and the town well served by restaurants. Parliament Street and Cheltenham Parade are lined with many independent and chain restaurants.

On 5 July 2014, Harrogate served as the finish line of the first stage of the Tour de France. The event attracted record crowds to the town centre and was televised to a global audience. British cyclist Mark Cavendish was forced to exit the race when he crashed a few metres from the finish line and suffered a dislocated shoulder. A March 2013 survey from the British property website Rightmove ranked Harrogate as the “happiest place” to live in the United Kingdom, an acclaim repeated in 2014 and 2015. Harrogate District Hospital also has the best cancer care of any hospital in England.

In the early 21st-century spending boom before the late 2000s recession the city saw large amounts of new retail, commercial, housing and public service construction spending. Tourist attractions include the historic Old Town and Museum Quarter, Hull Marina and The Deep, a city landmark. The redevelopment of one of Hull’s main thoroughfares, Ferensway, included the opening of St. Stephen’s Hull and the new Hull Truck Theatre.

A third of the City of Sheffield lies within the Peak District national park. This means there are more than 250 parks, woodlands and gardens in the city, and an estimated 2 million trees, giving Sheffield the highest ratio of trees to people of any city in Europe. The Sheffield Walk of Fame in the City Centre honours famous Sheffield residents past and present in a similar way to the Hollywood version. There are about 1,100 listed buildings in Sheffield, of these, only five are Grade I listed.

Sheffield has been home to several well-known bands and musicians, with a notably large number of synthpop and other electronic bands originating from the city. In 1999, the National Centre for Popular Music, a museum dedicated to the subject of popular music, was opened in the city. It was not as successful as was hoped, however, and later evolved to become a live music venue.

The City of York offers a wealth of historic attractions, of which York Minster is the most prominent, and a variety of cultural and sporting activities making it a popular tourist destination for millions. York was voted European Tourism City of the Year by European Cities Marketing in June 2007 beating 130 other European cities to gain first place, surpassing Gothenburg in Sweden (second) and Valencia in Spain (third). York was also voted safest place to visit in the 2010 conde nast readers traveller awards.

York Minster, the largest Gothic cathedral in Northern Europe, dominates the city. York Castle, a complex of buildings ranging from the medieval Clifford’s Tower to the 20th century entrance to the York Castle Museum. York is noted for its numerous churches and pubs. Most of the remaining churches in York are from the medieval period. St William’s College behind the Minster, and Bedern Hall, off Goodramgate, are former dwelling places of the canons of the Minster.

The city contains numerous museums and historic buildings such the Yorkshire Museum and its Museum Gardens, JORVIK Viking Centre, the York Art Gallery, The Richard III Museum and the Merchant Adventures’ Hall.

The National Media Museum hosts the Bradford International Film Festival annually in March. In June 2009 Bradford was designated the world’s first UNESCO City of Film for its links to the production and distribution of films, its media and film museum and its “cinematographic legacy”.
There are four theatres in Bradford. The Alhambra also has a smaller studio theatre in the same complex. These are operated by City of Bradford Metropolitan District Council. The Theatre in the Mill is a small studio theatre at the University of Bradford, which presents student and community shows and small-scale touring professional work. The Bradford Playhouse is a privately run venue with a medium-sized proscenium theatre and a small studio.

Nightlife in Bradford has traditionally centred on Manor Row and Manningham Lane. More recently, several clubs and pubs have opened in the West End of Bradford, around the Alhambra Theatre, turning what was a previously fairly quiet area into one that is often crowded and vibrant at night. North Parade has also seen several new themed bars open and is at the heart of the Independent Quarter of the city. The Bradford Mela is now part of the bigger Bradford Festival which takes place in June. The word mela is Sanskrit for ‘a gathering’ or ‘to meet’. In the UK, melas provide an opportunity for communities to come together to celebrate and share their cultures.

With a population of just over 61,000, Scarborough is the largest holiday resort on the Yorkshire coast. The town has fishing and service industries, including a growing digital and creative economy, as well as being a tourist destination. The South Bay was the site of the original early-medieval settlement and harbour, which form the old town. This remains the main tourist area, with a sandy beach, cafés, amusements, arcades, theatres and entertainment facilities. In 2010 the town was the winner of the ‘Great Town Award’, as nominated by the Academy of Urbanism, beating Chester and Cambridge respectively.

The tourism trade continues to be a major part of the local economy despite the current affordability of foreign holidays. While weekend and mid-week-break trade are tending to replace the traditional week-long family holiday, the beaches and attractions are always very busy throughout summer – a marked contrast to the quieter winter months when Scarborough is often seen as a peaceful bolt-hole from cities such as Leeds and Bradford.

Today, Leeds is ranked as a gamma world city by the Globalization and World Cities Research Network; and is considered the cultural, financial and commercial heart of the West Yorkshire Urban Area. Outside of London, Leeds has the third busiest railway station and sixteenth busiest airport in terms of passenger numbers in England. Leeds has seen great expenditure on regenerating the city, attracting in investments and flagship projects, as found in Leeds city centre. Many developments boasting luxurious penthouse apartments have been built close to the city centre.

The extensive retail area of Leeds is identified as the principal regional shopping centre for the whole of the Yorkshire and the Humber region and approximately 3.2 million people live within its catchment area. There are a number of indoor shopping centres in the centre of the city, including the Merrion Centre, St John’s Centre, The Core, the Victoria Quarter, The Light, the Corn Exchange and Trinity Leeds.In total there are approximately 1,000 retail stores, with a combined floorspace of 2,264,100 square feet (210,340 m2).

The built environment embraces edifices of civic pride like Morley Town Hall and the trio of buildings in Leeds, Leeds Town Hall, Corn Exchange and Leeds City Museum by the architect Cuthbert Brodrick.