Electric cars have certainly been a long time in rising to prominence, but this looks like the year when they finally might hit the big time. And why wouldn’t they? An electric vehicle (EV) lets you travel in silence and produces zero emissions. You don't have to pay road tax, London dwellers don’t need to worry about the Congestion Charge, and the government will even give you a grant to buy one. 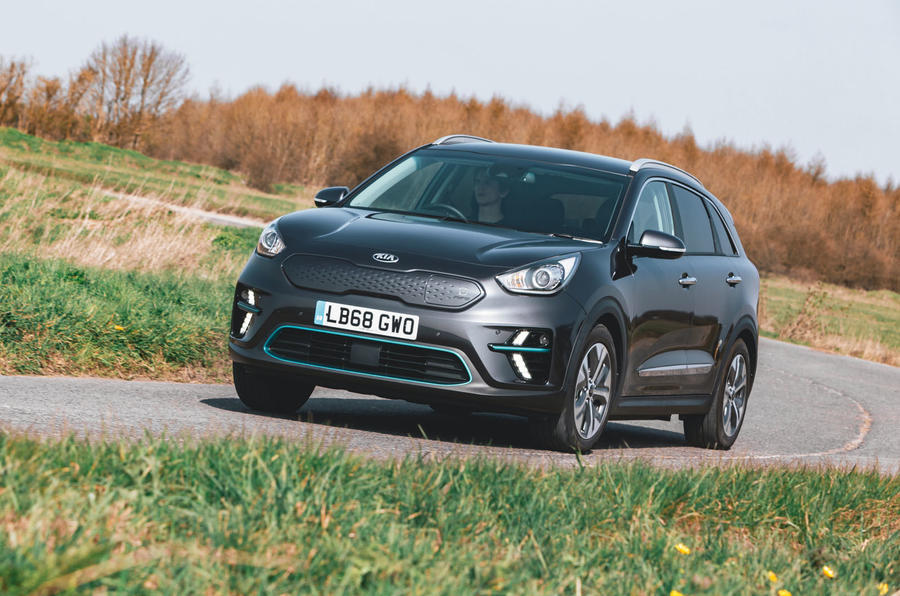 The Kia e-Niro redefines how much real-world range and family-friendly usability we should now expect from an electric vehicle towards the more affordable end of the price spectrum. For around £35,000, the car’s 64kWh battery pack enables it to comfortably travel 230 miles on a single charge; and further still if you stay off the motorway or around town. A few years ago, that would be the sort of range you’d be expecting from something far pricier, and probably with a Tesla badge on its nose.

As Volkswagen looks to move on from the fallout of Dieselgate, the ID 3 is set to take centre-stage as the marque’s environmentally friendly wunderkind. This Golf-sized hatchback also gets the new ‘ID’ sub-brand off the mark, and aims to do so with the kind of mass-market sophistication and class-leading usability for which Volkswagen is rightly famed.

The all-electric version of the 208 supermini is one of several PSA Group compact EVs coming to market this year, but it's the best-priced and also the most visually appealing. For its mix of usable range, performance, value, practicality, style, perceived quality and driver appeal, it clearly deserves to figure highly if you’re shopping for your first electric car this year.

Until quite recently, an electric car good enough to combine a genuine 300-mile daily-use range with a sub-£30,000 price point seemed an awfully long way off. The Hyundai Kona Electric made it a reality only a couple of years ago, however; quite a coup for its aspiring Korean maker.

Mini has been a long time preparing to enter the electric car market; but now that it finally has, it has certainly brought all of the fun factor you expect of the brand - albeit packaged with a few equally typical usability restrictions. Based exclusively on the three-door Mini bodyshell, the Mini Electric adopts the powertrain from the BMW i3S, giving it a very healthy 181bhp and 199lb ft of torque. Performance is notably stronger than many of the cars you might compare it with in this list, while handling is grippy and darty and agile in the enduring dynamic traditions of the Mini brand.

Kia’s boxy compact crossover is back for a third-generation, but this time around the Soul will be offered exclusively as an electric vehicle in European markets. While not particularly sporty, it rides well, performs strongly and doesn’t make too much of a point of its 1682kg kerb weight. And because it makes use of the same powertrain as the slightly bigger e-Niro, it promises a WLTP-certified range of 280 miles when equipped with a 64kWh battery.

The Nissan Leaf, in first-generation form, set the mould for the affordable electric car approaching a decade ago – and in new second-generation form, it’s still right in amongst the list of contenders who are following in its tread marks. Having had a 25 per cent boost on battery capacity, the Nissan now leads some of its rivals with a WLTP-certified range of 168 miles - rising to more than 200 in the case of the range-topping 64kWh 'e+' version. It’s also got significantly more power and torque than its direct predecessor; performs fairly keenly; feels like a more rounded car to drive generally; and has one of the strongest showings here on daily-use practicality for a small family.

Vauxhall's sister version of the Peugeot e-208 doesn't quite have the style or the claimed WLTP range of its French relation, doesn't have the imaginatively configured interior, and isn't priced quite as keenly either. They're fine margins by which to relegate the car so many places in this top ten chart, but that's simply how competitive this varied class is becoming.

Honda has taken a leftfield approach with its first all-electric car, the Honda E supermini - which is unusually compact for an electric car, and innovative in several ways. A rear-mounted motor promises packaging efficiency (although the car itself fails a little to follow through with it) while all-independent suspension heralds the ride and handling sophistication of a bigger car (which the car does a deal better to actually supply).

The Renault Zoe was always an appealing short-hopper electric supermini, even when it was offered with a 22kWh battery and had only 80 miles of real-world range. The car’s usability was enhanced during a mid-life update, however, by a 41kWh battery option which, on a warm day, turns the car into one good for 150 miles of mixed real-world use.