Get closer to nature by discovering Yorkshire's wilder side! With rolling countryside, unspoilt habitat and the stunning Dinosaur Coast, Yorkshire is a perfect sanctuary for many of England's greatest species. Not to mention the keenest wildlife enthusiasts. See the following Top 10 wildlife watching spots:

The cliffs of the coast are a haven for all manner of sealife and perfect for bird watching. RSPB Bempton Cliffs is a family favourite, and easily the best place in England to see, hear and smell seabirds! From April to August more than 500,000 birds make the cliffs seem alive. Take yourself on a bracing walk along chalk clifftops - at over 400 feet, they're Britain's highest. The skies are filled with puffins, gannets and guillemots. It's an astonishing sight. The RSPB now have a National Seabird Centre which is the gateway to the seabird spectacle. There is also six accessible viewing platforms and accessible paths.

Whitby is the finest place for whale watching on the Yorkshire coast and early autumn evenings are the best time. Between mid September and early November, one of Whitby Coastal Cruises purpose-built, twin-decked pleasure boats leaves Whitby harbour in search of minke whales that follow the shoals of North Sea herring which swim down from the Arctic to their spawning grounds off Whitby.

For an out of this world experience, head off to the eerily enchanting Spurn Point, a prime spot for migrating birdlife. This unique hooked finger of sand and shingle sweeps across the mouth of the Humber into the North Sea. At 5km long but a mere 50m wide at times, it's a ghostly wilderness and a National Nature Reserve with a weird beauty all of its own. Head for the deserted lighthouse at the fingertip and look for terns and plovers which nest among spiky, dusty-blue clumps of sea holly and the vivid yellow blossoms of horned holly.

The Dales and Moors

How about a bit of red squirrel spotting on the Snaizeholme red squirrel trail? The Widdale Red Squirrel Reserve near Hawes, is one of only 16 areas in the UK dedicated to preserving the red squirrel in its natural habitat.

You can see this shy native species in its natural woodland environment all year round but autumn is when they are at their most active as they gather nuts and prepare their drays for winter. There is a specially created viewing area which gives you the best opportunity to spot the squirrels and take photos.

Between April and July, watch the peregrine falcons as they sore above Malham Cove. If you're lucky, the pair of peregrine falcons' chicks will be the star attractions. Other upland bird species can also be spotted including little owl, green woodpecker and redstart. A special free peregrine watch viewpoint runs from 7 April until 31 July that lets people watch the birds through high-powered telescopes. The watch site is manned by YDNPA and RSPB staff and volunteers between 10.30am and 4.30pm from Saturday to Wednesday.

Follow the 4.5 mile Ingleton Waterfalls Trail through ancient oak woodland and magnificent Dales scenery via a series of spectacular waterfalls. As you walk along the trail you'll not only see the ancient base rocks, but also the many rare plants, birds and trees they support. It's this rich variety of unique geological features and plant life that makes this a Site of Special Scientific Interest (SSSI). The site is particularly rich in woodland mosses and liverworts and is the sole site for the endemic Yorkshire feather moss. Brown trout can commonly be seen leaping up the waterfalls and dippers are often seen at water level, indicating good water quality.

North York Moors - big five! One of the best places for watching wildlife in Yorkshire is the North York Moors National Park, for here they have their very own big five, well, not big in size but big in importance! Much of the moorland of the National Park has special national and European recognition and it is a superb place to see golden plover, curlew, lapwing, red grouse and Britain's smallest bird of prey, the merlin.

Wild all over Yorkshire

Take a walk on the wild side with English Heritage: Yorkshire's many English Heritage sites maybe better known for their abbeys and castles. But take a closer look. From wild deer, rabbits and squirrels at peaceful Rievaulx Abbey, to the famous stoats at Mount Grace Priory, and even bats at Brodsworth Hall, there's a wealth of wildlife to discover.

Red kites in full flight at Harewood House, near Leeds, are a sight that leaves many in awe. Released on the estate in 1999 as part of a conservation initiative, their numbers are gradually increasing each year. So spotting a few should be pretty easy. 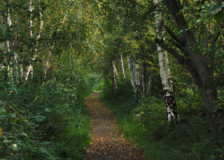 And at number 1 explore the seven miles of nature trails along the routes of old railway lines around Potteric Carr, a 200 hectare nature reserve located on the outskirts of Doncaster. The largest inland wetland in the UK outside of London, the main habitats include open water, reedbed, woodland, marsh, and small meadows, all of which create a home for different wildlife all year round. In spring there are migrating birds arriving in large numbers and in summer you can discover dragonflies, butterflies, and flower assemblages. Autumn brings in the wintering birds and a wide ranging colourful display of fungi. Into the winter months the reserve plays host to large numbers of birds and is an excellent spot to see bitterns, water rails and kingfishers.