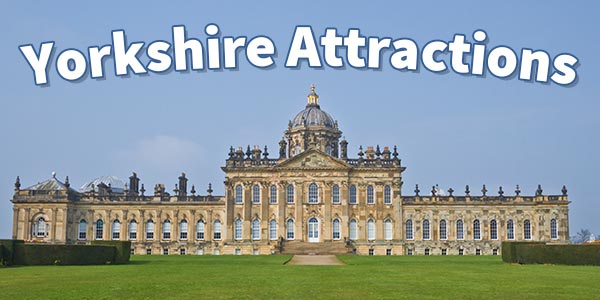 From World Heritage sites to theme parks, Yorkshire has more than plenty to offer the visitor all year round. You would be forgiven for saying you’re spoilt for choice, but to help you focus a little we have compiled this rather helpful list of the county’s Top 10 attractions.

Built on the site of the ruined Henderskelfe Castle, Castle Howard is regarded as Yorkshire’s finest stately homes. Situated in North Yorkshire, it has been the home of the Carlisle branch of the Howard family for more than 300 years. The house became famous in 1981 when it was used as the location in the TV drama adaptation of Evelyn Waugh’s Brideshead Revisited. Since then it has enjoyed more screen exposure with a two-hour film version of Brideshead and Death Comes to Pemberley.

236,440 people visited Castle Howard in 2014, most of the visitors coming especially to see the castle and the gardens, however, Castle Howard hosts many events each year such as an Easter fair and a yearly triathlon which has run for the past seven years. Castle Howard is also the home to a number of shops such as a Code & Coffee Shop, a garden and gift centre and a farm & deli shop. Here you can enjoy homemade and cooked food and gift products.

Eureka! The National Children’s Museum, is an interactive educational museum for children in Halifax, with a focus on learning through play. It is run as an educational charity not a for profit organisation.

Eureka had a total of 293,332 visitors in 2014. Even though Eureka is a charity they do not get any statutory funding from the government or local authority, this is why they have an entrance fee. They have hundreds of interactive, hands-on exhibits designed to inspire children aged 0 to 11 to learn about themselves and the world around them through play and discovery.

Tropical world is located in Roundhay Park in Leeds, West Yorkshire and features a butterfly house and aquariums. Inside you are likely to encounter many species of birds and also reptiles roaming free. There are also many other animals in enclosures including a popular group of meerkats. If you are not afraid of the dark the nocturnal house has creatures such as bats which are usually active when the sun goes down.

As well as the main exhibits there are a number of other facilities such as the courtyards, which house cotton top tamarins, ringtail lemurs, and a pond that hosts Koi Carp and goldfish. There is even a canal garden which was restored in 2000. It was largely due to this facility that Tropical World was able to attract 315,566 in 2014

The railway puts on many different events during the year to celebrate holidays or events. One of the more popular events is the War Time Weekend where the operation of railways in the UK during the Second World War are demonstrated. The stations are decorated to appear as if they would be during WW2. Also, a popular event is the yearly Santa Special Train which runs during the Christmas period, complete with Elves, Santa’s Grotto, presents and mince pies.

Harlow Carr has a number of features that visitors can view or use such as the ‘Winter Walk’ or the ‘Kitchen Garden’. Another garden is the ‘Gardens Through Times’, which shows gardens from different periods and demonstrates gardening techniques of the past. Aside from the gardens the centre also has a shop, plant centre, and Betty’s Cafe Tea Rooms.

Located three miles west of Ripon, Fountains Abbey is one of the largest preserved ruined Cistercian monasteries in England. Founded in 112, the abbey operated for over 400 years, until 1539, when Henry VIII ordered the dissolution of the monasteries. The Abbey building enjoys a Grade 1 listed status and is owned by the National Trust.

Situated in the magnificent settings of Studley Royal Park, England’s most important 18th century Water Garden, the Abbey is visited by thousands every year, with summer being the busiest time. In January 2010, Fountains Abbey and Studley Royal became two of the first National Trust properties to be included in Google Street View using the Google Trike.

The JORVIK Viking Centre is a museum and visitor attraction in York. Formed in 1984 by the York Archaeological Trust, Jorvik is built on the site of a 1,000-year-old Viking settlement. Peopled with figures, sounds, and smells, as well as pigsties, fish markets and latrines, the Viking city is brought to life using innovative interpretative methods. JORVIK Viking Centre opened in April 1984. Since its formation, the Centre has had close to 20 million visitors.

In 2010 the centre received an investment which helped to make improvements to current exhibits which included a time capsule that took people back to 5:30, October 25th, 975AD. JORVIK also holds a yearly festival that attracts a lot of Viking enthusiast, the festival includes combat re-enactments involving volunteers from all over the world.

The Deep is a public aquarium situated at Sammy’s point, at the confluence of the River Hull and the Humber estuary in Hull. When it first opened in 2002 and was billed as the World’s only submarium, the tanks contain thousands of sea creatures including seven species of shark. The building itself which has become a landmark of modern day Yorkshire was designed by Sir Terry Farrell and was built as part of the UK National Lottery’s Millennium Commission project.

Aquaria exhibits include the ‘Tropical Lagoon of Light’, teeming with brightly coloured fish and rays, a 10 metre deep ‘Endless Oceans’ exhibit containing 2,500,000 litres of water, Europe’s deepest viewing tunnel at nine meters and a glass lift straight through it. This tank is home to sharks, rays and northern England’s only pair of green sawfish. The Deep also hosts daily feeding shows with divers feeding the sharks and rays in a daily show.

The Cathedral and Meteorological Church of Saint Peter In York or as most people know it, York Minster, is one of the largest of its kind in Northern Europe. The Minister is the seat of the Archbishop of York, The second-highest office of the Church of England. The Minister has the largest expanse of medieval stained glass in the world. Over the years there have been many different renovations due to fires that have left the building heavily modified.

Flamingo Land is a theme park and zoo resort located. Starting off with Zoosection, Flamingo Land once claimed to be the largest animal holder of its kind in Europe, housing over 1,000 animals. Flamingo Land houses exotic animals, including camels, Brazilian tapirs, zebras and much more. The park takes part in breeding programmes and has had successful ventures with Chester Zoo and Longleat Safari Park.

Flamingo Land is divided up into a number of areas that are named on a map to help people find their location, areas included River Side One, the Plaza, Seaside Adventure, Splosh, Dino Stone Park, African Plains and Children’s Planet. Flamingo land also features a number of roller coasters such as Velocity, Kumali and the former steepest roller-coaster in world Mumbo Jumbo.