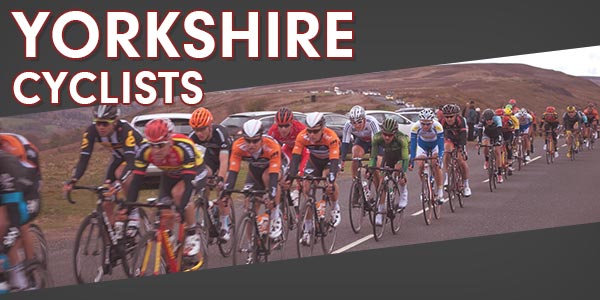 Following the great success of 2014 Tour De France Grand Départ, the media have hailed Yorkshire as “Europe’s newest cycling destination”, but Yorkshire has always had a rich cycling heritage, despite the rugged and hilly terrain, with some of the UK’s oldest cycling clubs located in the county.

It’s also true to say that some of Britain’s greatest pioneers of the cycling world come from Yorkshire. Based on riders who have won the most World Championship ‘Rainbow’ Jerseys and stage wins we have compiled our all time Top 10 Yorkshire Cyclists.

Born in Shipley in 1967. Rayner’s love of cycling began when he joined East Bradford CC when only 12 in 1979. In 1984 he joined the Bradford Wheelers-Ellis Briggs-Saturne team and won the national junior road race championships at Stoke-on-Trent. Soon after Rayner joined the G.S. Porcari-Fanini-Berti Team in Italy where he stayed until 1986.

Sadly Rayners career was tragically cut short when he was involved in an altercation with a bouncer at Maestro’s Nightclub in Bradford and died from his injuries in November 1994. Rayner’s legacy lives on through a charity set up in his name on January 12, 1995. The Dave Rayner Memorial Fund was set up to help riders go on to careers in Europe. David Millar became the first beneficiary of the fund and went on to a successful if controversial, career as a professional cyclist

Born in North Ferriby in 1967. A British track and road racing cyclist, Sally Boyden was British national points race champion five times and British road and track champion 10 times. She was also a frequent medalist at the World Masters Championships and held the British record for the flying kilometre and standing kilometre time trial on the track. Boyden’s kilometre record of 1:14.18 stood for 10 years until Victoria Pendleton broke it with 1:10.845 in 2005. She was also the European Masters Track Champion in the individual pursuit event for the age 35-38 category in 2002.

Born in Middlesborough in 1948, One of Britain’s top racing cyclists in the 1970s and 1980s, Sid won 380 races during his 18-year professional career and was British National Champion three times. He also won a stage of the Tour of Majorca and also in the 1973 Tour of Switzerland.

Born in Sheffield in 1961, Malcolm Elliott was part of the ANC-Halfords team invited to take part in the 1987 Tour de France. ANC-Halfords were the first British trade team to take part in the Tour and had been using the early season classics to hone their skills at riding top professional races. Elliott showed he had what it takes to move up a level and finished 3rd in the famous Amstel Gold Classic in 1987. Their Tour was a disaster from the start as the team were lacking in vital equipment at the start in Berlin. Graham Jones was the only experienced rider and to pile on the pressure it was one of the fastest tours for years. Four riders finished Adrian Timmis, Malcolm Elliott, Kvetoslav Palov and Guy Gallopin. Elliot managed 3rd on the stage into Bordeaux and 94th overall.

Although ANC-Halfords ‘imploded’ after the Tour, Elliott’s gutsy performance bagged him a contract on Stephen Roche’s Fagor team for the 1988 season. It was with Fagor he took his first stage win in the Vuelta Espana (Tour of Spain) in the same year.

1989 saw him riding for Spanish squad Teka and bagging another two stage wins in the Vuelta.
Elliott continued riding in Europe until the end of 1992. After which he signed for Chevrolet-LA Sheriffs and continued his racing in the USA until 1997 when the team he was with, Comptel-Colorado Cyclist, got into financial difficulties and went bust forcing Elliott to retire.

Britain’s first Tour stage win came in 1958 when Robinson took stage seven into Brest. Just to show it wasn’t just down to luck, Robinson also went on to win stage 20 from Annecy to Chalon-sur-Saone by 20 minutes. His biggest career win came in 1961 when he came first in the Criterium de Dauphine Libere. There’s no doubt that riding as a professional cyclist in Europe laid the foundations for other British cyclists like Barry Hoban and Tom Simpson to follow.

Born in Wakefield in 1940, Barry Hoban was a pioneer in the Tour de France, holding the record for the most stages won in the Tour by a British rider, two of which were consecutive stage wins, until Mark Cavendish equalled his record in 1988.

Hoban’s Tour de France experience began under tragic circumstances. On the thirteenth stage of the 1967 Tour, on the slopes of Mont Ventoux, the only Briton to have worn the yellow jersey up to that point (stage 12 of the 1962 Tour) Tom Simpson collapsed and died. The next day the peloton, out of respect, allowed Hoban to ride clear and take the 14th stage at Sète. Hoban went on to win eight tour stages between 1967 and 1975. He still holds the record for the most Tours completed by a British rider.

Born in Rotherham in 1987. As a junior rider, Swift impressed competing at the Junior Commonwealth Games, winning bronze in the points race. He also won the Junior Points Race Championship in 2004 followed by the scratch race in 2005. In 2005, he also competed in the senior scratch race where he finished third taking the bronze medal. In 2012, he became Britain’s first ever World Scratch Champion. 2007 saw him turn professional with British team Barloworld winning the King of the Mountains title in the Tour of Britain. In 2008, he rode for the British Cycling Development team finishing fourth in the 2008 Olympic Games road race.

After the championships, Swift signed a two-year contract with Russian squad Katusha and was selected to ride the 2009 Giro d’Italia finishing third in stage two of that race. During a controversial change of teams, Swift joined the new British-based Team Sky winning a stage in 2010 Tour of Picardie as well as the general classification, the points classification and best young rider.

Swift continued to impress by winning stages 2 and 6 of the 2011 Tour Down Under. Going on to win stage 2 of the Tour of California, taking the race lead after stage 1 was abandoned due to bad weather. This year also saw him ride his first Tour de France where he finished 6th on stage 15.
In 2012, Swift switched to the track with a hope of representing Great Britain in the London Olympics. This didn’t come off but he did compete in the World Championships winning the rainbow jersey in the Scratch Race and finishing second in the points race, before teaming up with Geraint Thomas to take silver in the madison. Ben was also pencilled in to ride the Giro d’Italia in this year but crashed during a training session the week before and had to pull-out suffering from a broken shoulder.

Team Sky selected him to ride in the Tour of Poland where he won the second and fifth stages as well as the TofP red and white points jersey. Swifts 2012 finished on a high with a second placed finish on stage 18 of the Vuelta Espana. The following March saw Swift riding the early season Milan-San Remo Classic where he finished in third position. 2015 wasn’t so illustrious as he crashed out of the inaugural Tour de Yorkshire. Again injuring his shoulder.

Born in Barnsley in 1985, Ed is one of Britain’s top track cyclists winning two major track championships. The World Omnium in 2010 and the European Omnium in 201. He also won gold in the men’s team pursuit and bronze in the omnium at the London 2012 Summer Olympics.

Born in Otley in 1988, Lizzie has ridden through the ranks to become the 2015-16 World, Commonwealth and National Road race championships. Lizzie also pulled on the Women’s Road World Cup champion’s jersey in 2014-15.

In the 2012 London Summer Olympics, she claimed the silver medal, in heavy rain, finishing behind gold medalist Marianne Vos of the Netherlands. Between 2009 and 2010 Lizzie won a total of five medals at the UCI Track Cycling World Championships, including the 2009 team pursuit gold medal with Joanna Rowsell and Wendy Houvennagel.

So impressive a rider was Beryl Burton the French bestowed the rare honour, for a woman, of an invite to compete in the Grand Prix des Nations in 1967. In 1982, Beryl teamed up with her daughter Denise to set a new British 10-mile record of 21 minutes, 25 seconds for women riding a tandem.