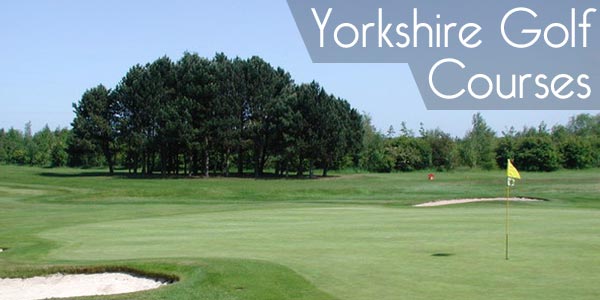 Yorkshire is home to over 30 golf course of varying shapes and sizes, some of which have been host to many famous golf tournaments and events. In 1894, the Yorkshire Union of Golf Clubs was formed and became the largest of the county unions affiliated to the EGU, with 191 club members divided into eight district unions. The Yorkshire Union is also a member of the seven member EGU Northern Counties Group where it has won the annual round robin league in 13 of the last 27 years.

Founded in 1926 Sand Moor Golf Club the first to be laid out by Dr Alistair MacKenzie. Who also laid out neighbouring golf course Moortown, When additional land was acquired during the mid 1960s that layout was further modified by Henry Cotton.

In more recent times there have been many extensive audit of the courses, with a number improvements to the golf club committee. The clubhouse is situated on the brow of a hill, overlooking Eccup Reservoir where holes 1, 5, 6 and 18 are located.

Huddersfield Golf Club was founded in 1891 by prolific architect Tom Dunn. Since then there have been many changes to the course. Sandy Herd, the first professional to win the open, later laid out some improvements. More recently Cameron Sinclair upgraded all eighteen greens to USGA standard.

Due to these high level renovations the course has hosted many prestigious competitions both amateur and professional, the Lawrence Batley Seniors Tournament and the Ladies Golf Union and English Ladies Golf Association to name a few.

Founded In 1890 Ilkley Golf Club is the third oldest golf course to be found in Yorkshire. Originally a nine hole course, it grew in popularity and the club added another nine holes in 1898, employing the architectural skills of Alistair MacKenzie and Harry Colt. Located in the picturesque town of Ilkley the course has been praised for being a beautiful place to visit even if you’re not playing golf.

Many Golf Courses feature water in some shape or form, but no course is more influenced by water features than Ilkley Golf Course with River, Bridge, Island and Kingfisher lending their names to some of the opening holes. The fourth has been described as the of the most memorable hole. Referred to as long, there are many trees that pose a hazard, but the sheer scenic beauty remains until the very last putt drops.

Founded In 1906 by Sandy Herd, Pannal Golf Club is located to the south of Harrogate in the middle of glorious countryside with views, on a clear day, to Wharfedale and even as far as York. Adjustments were later made in 1935 by Major MacKenzie, and it has been described as typical Yorkshire Moorland course, with added factors of exposed winds with the slight protection with a range trees.

Pannal has been host of English Women’s Championship as long as 1927, other events included the inaugural PGA Matchplay Championship in 1955 and the seniors in 1985. Pannal is labelled a challenging course with challenges addressed above of strong winds however there is no tiring terrain so accurate drives and careful planning will show it reward.

Laid out in 1897 when 100 acres of land in the Duke of Norfolk’s estate was leased for golfing purposes, then was later converted to a club in 1912. After making the astute decision to to purposes the course course outright then hire Harry Colt to remodel the layout. These changes lead to the trees lined fairways are routed in an out and back fashion over rather hilly terrain with plenty of pleasant elevation.

The signature hole by many is called saucer which has a tee shot that must carry across a deep valley cloaked in heather. Another mention is quarry which is a short 136 yards which plays across a former quarry. Alison Nicholas the former US Women’s Champion in 1997 and the captain of the Solheim Cup in 2009, is a member at Hallamshire, and her association to the club is something they are very proud of.

Founded in 1906 but moved to its current site in 1935 after James Braid identified the land a few years earlier. Located one mile from the centre of the historic city of York, it’s a high class heathland course, home to the Benson and Hedges International open during the 1970s and 1980s. This televised tournament immediately made Fulford a household name and gave it nationwide recognition as one of the country’s best inland courses.

Measuring 6,779 Yards from the back tees, The course is said to a serious test for handicap golfer, but the course is too short for today’s long hitting professionals. This can be seen as Ian Woosnam posted the all corners course record in 1985 with an amazing 62.

Founded in 1891 when Tom Dunn laid out the original nine holes on Lindrick Common. A second nine was added in 1884 and then forty years later, the club changed its name to Lindrick Golf Club and Fred Hawtree made further Revisions to the layout. As with many modern golf courses of this era, Lindrick measuring a little over 6,600 yards, is simply not long enough to host today’s professional men’s tournaments.

What makes Lindrick such special course is its history, as the course was the host to the 1957 Ryder cup, where Great Britain beat USA. This victory had been long overdue as the last time England as they had not beaten USA by that stage since 1933 at the Southport & Ainsdale. In more modern times the course still holds a number of important amateur events.

Founded in 1910 after Fred Lawson-Brown wanted to build a equivalent golf course to the Ganton golf course after a visit. He used the help of Alister MAcKenzie who was in the area making the other golf course on this list Alwoodley. This meant seven year later after Fred had visited Ganton, Moortown was founded. The course itself has been described as having a soft turf that provides the bouncy cushion effect when walking, But visitors have been told its no pushover course.

Moortown Course has hosted a number of events over the years however none was as famous as the 1929 Ryder Cup, officially the second match to take place on British soil. The game itself was a tight 7-5 victory for the Team GB. Other famous events include the1974 English Open Amateur stroke play Championship, which in its own right was not famous but the bizarre moment where Nigel Denham hit a shot that shot through the Clubhouse billiard room, then marched inside and chipped his next shot through the window to within five yards of the pin.

Founded in 1907 it was made to be one of the finest and most subtle inland courses in the British Isles. The course itself is located in a very secluded spot, which has been said to similar to the Woodhall Spa Hotchkin course which also has a very high amount of praise. The course is located just North of Leeds and was designed by the collaboration off Alistair MAcKenzie and Harry Colt.

The design is mix of both heathland and moorland with a springy surface, it also described as one of the most colourful course in the isles. When people visit the course they are asked to bring a full compliment of golf clubs, as this course will test every club in your bag.

Founded in 1891 after it had been laid out by Tom Chisholm. In the more later years the course was modified by a number of people like Ted Ray, J.H. Taylor and C.K Cotton. It is situated in the rural vale of Pickering, just nine miles away from the coast. he bunkering is a big feature for this course with over 100 cunningly placed bunkers which only very good golfers will avoid.

Ganton Golf Club played host to the 1949 Ryder cup matches between USA and Great Britain, the team captains that year were Ben Hogan USA and Charles Whitcombe GB. After some controversy about the grooves of the clubs of the British players, USA still came away the victors with a scoreline 7-5. Other big events held at this course are the 2000 Curtis Cup and the 2003 Walker Cup.