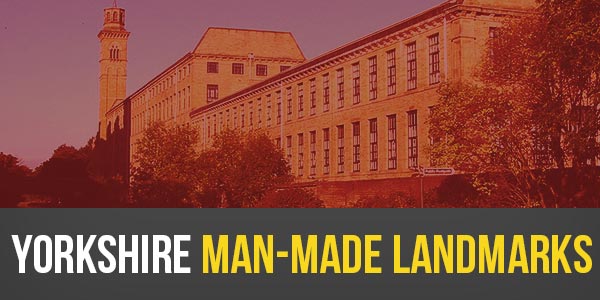 Salts Mill is a former textile mill, now an art gallery, shopping centre, and restaurant complex in Saltaire, Bradford, West Yorkshire, England. It was built by Sir Titus Salt in 1853, and the present-day 1853 Gallery takes its name from the date of the building which houses it. The mill has many paintings by the local artist David Hockney on display and also provides offices for Pace plc.

When completed, the mill was the largest industrial building in the world by total floor area. It is a grade II listed building. The mill closed in 1986, and the following year it was sold to Jonathan Silver, who began a long renovation scheme.

Scarborough Castle is a former medieval Royal fortress situated on a rocky promontory overlooking the North Sea and Scarborough, North Yorkshire. The site of the castle, encompassing the Iron Age settlement, Roman signal station, an Anglo-Scandinavian settlement and chapel, the 12th-century enclosure castle and 18th-century battery, is a scheduled monument of national importance.

During the second half of the 19th century the castle became a tourist attraction. The foundations of a medieval hall were excavated in 1888, and an 1890 photograph shows visitors using the grounds to practice archery. The castle site has been managed by English Heritage since 1984. A visitor centre provides admission to all extant remains, and has an exhibition of artefacts from the site and viewing platforms.

The Humber Bridge, near Kingston upon Hull, England, is a 2,220-metre (7,280 ft) single-span suspension bridge, which opened to traffic on 24 June 1981. It was the longest of its type in the world when opened, and is now the seventh-longest. It spans the Humber (the estuary formed by the rivers Trent and Ouse) between Barton-upon-Humber on the south bank and Hessle on the north bank, connecting the East Riding of Yorkshire and North Lincolnshire.

As of 2006, the bridge carried an average of 120,000 vehicles per week. The toll was £3.00 each way for cars (higher for commercial vehicles), which made it the most expensive toll crossing in the United Kingdom. As of 1 April 2012, the toll was reduced to £1.50 each way after the UK government deferred £150 million from the bridge’s current debt.

Ripon Cathedral is a seat of the Bishop of Leeds and one of three co-equal mother churches of the Diocese of West Yorkshire and the Dales, situated in the small North Yorkshire city of Ripon, England. The cathedral has Grade I listed building status. There has been a stone church on the site since 672, people have been coming to worship and pray at Ripon for more than 1,350 years

The cathedral building itself is part of this continuing act of worship, begun in the 7th century when saint Wilfrid built one of England first stone churches on this site, and still renewed every day. Within the nave and choir, you can see the evidence of 800 years in which master craftsmen have expressed their faith in wood and stone.

York has, since Roman times, been defended by walls of one form or another. To this day, substantial portions of the walls remain, and York has more miles of intact wall than any other city in England. They are known variously as York City Walls, the Bar Walls and the Roman walls (though this last is a misnomer as very little of the extant stonework is of Roman origin, and the course of the wall has been substantially altered since Roman times).

The Danes occupied the city in 867. By this time the Roman defences were in poor repair, and the Danes demolished all the towers save the Multangular Tower and restored the walls. Barker Tower was once linked by a chain across the river, parallel to the 19th-century Lendal Bridge. A small stretch of wall then leads to the entrance to Museum Gardens, the Multangular Tower and the original line of the Roman walls.

Today the walls are a scheduled ancient monument and a grade I listed building.

Beverley Minster in Beverley, East Riding of Yorkshire, is a parish church in the Church of England. It is one of the largest parish churches in the UK, larger than one third of all English cathedrals and regarded as a gothic masterpiece by many.

Originally a collegiate church, it was not selected as a bishop’s seat during the Dissolution of the Monasteries; nevertheless it survived as a parish church and the chapter house was the only major part of the building to be lost. It is part of the Greater Churches Group and a Grade I listed building.

Rievaulx Abbey is a former Cistercian abbey in Rievaulx, near Helmsley in the North York Moors National Park, North Yorkshire, England. Headed by the Abbot of Rievaulx, it was one of the wealthiest abbeys in England until it was dissolved by Henry VIII of England in 1538. Its ruins are a tourist attraction, owned and maintained by English Heritage.

Rievaulx Abbey was founded in 1132 by twelve monks from Clairvaux Abbey as a mission for the colonisation of the north of England and Scotland. It was the first Cistercian abbey in the north. With time it became one of the great Cistercian abbeys of Yorkshire, second only to Fountains Abbey in fame.

Castle Howard is a stately home in North Yorkshire, England, 15 miles (24 km) north of York. It is a private residence, the home of the Carlisle branch of the Howard family for more than 300 years. Castle Howard is not a true castle, but this term is also used for English country houses erected on the site of a former military castle.

Building of Castle Howard began in 1699 and took over 100 years to complete to a design by Sir John Vanbrugh for the 3rd Earl of Carlisle. The site was that of the ruined Henderskelfe Castle, which had come into the Howard family in 1566 through the marriage of Thomas, 4th Duke of Norfolk to Elizabeth Leyburne widow of Thomas, 4th Baron Dacre.

Castle Howard has extensive and diverse gardens. There is a large formal garden immediately behind the house. The house is prominently situated on a ridge and this was exploited to create an English landscape park, which opens out from the formal garden and merges with the park.

Fountains Abbey is one of the largest and best preserved ruined Cistercian monasteries in England. It is located approximately 3 miles (5 kilometres) south-west of Ripon in North Yorkshire, near to the village of Aldfield. Founded in 1132, the abbey operated for over 400 years, until 1539, when Henry VIII ordered the Dissolution of the Monasteries. The abbey is a Grade I listed building owned by the National Trust and part of the designated Studley Royal Park including the Ruins of Fountains Abbey UNESCO World Heritage Site.

In 1986 the parkland in which the abbey is situated and the abbey was designated a World Heritage Site by UNESCO. It was recognised for fulfilling the criteria of being a masterpiece of human creative genius, and an outstanding example of a type of building or architectural or technological ensemble or landscape which illustrates significant stages in human history.

The Cathedral and Metropolitical Church of Saint Peter in York, commonly known as York Minster, is the cathedral of York, England, and is one of the largest of its kind in Northern Europe. The minster is the seat of the Archbishop of York, the second-highest office of the Church of England, and is the mother church for the Diocese of York and the Province of York. It is run by a dean and chapter, under the Dean of York. The title “minster” is attributed to churches established in the Anglo-Saxon period as missionary teaching churches, and serves now as an honorific title. Services in the minster are sometimes regarded as on the High Church or Anglo-Catholic end of the Anglican continuum.

The east end of the Minster was built between 1361 and 1405 in the Perpendicular Gothic style. Despite the change in style, noticeable in details such as the tracery and capitals, the eastern arm preserves the pattern of the nave. The east end contains a four bay choir; a second set of transepts, projecting only above half-height; and the Lady Chapel. The transepts are in line with the high altar and serve to throw light onto it. Behind the high altar is the Great East Window, the largest expanse of medieval stained glass in the world, which is currently undergoing a massive conservation project.

During the 20th century there was more concerted preservation work, especially following a 1967 survey that revealed the building, in particular the central tower, was close to collapse. £2,000,000 was raised and spent by 1972 to reinforce and strengthen the building foundations and roof. During the excavations that were carried out, remains of the north corner of the Roman Principia (headquarters of the Roman fort, Eboracum) were found under the south transept. This area, as well as remains of the Norman cathedral, re-opened to the public in spring 2013 as part of the new exhibition exploring the history of the building of York Minster.