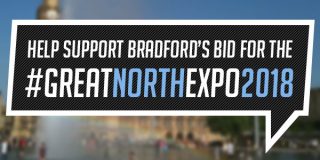 The spotlight will be on Bradford’s Great Exhibition North bid this Friday, September 16th. The government’s Department for Culture, Media and Sport is thought to be using the response to gauge local support for each bidding town or city, which might influence the final decision.

So, please lend your support to Bradford’s bid this Friday by using the DCMS’ hashtag #GreatNorthExpo2018 and encourage your staff, colleagues, relatives and friends to also take part. Please concentrate your efforts on Friday, not before, so we can make the biggest impact on the day.

The idea is to share your messages of support and images on Twitter, Facebook and Instagram and post pictures of your favourite cultural landmark or area of Bradford on your social media pages using #GreatNorthExpo2018. Use can also add Bradford’s own hashtag – #BradfordGXn – as well to make it clear which town you’re supporting.

We’ll be doing our part on Friday to support this hashtag, but we’d also like to see our YEN members turn out and show their support!

Bradford Council Leader Susan Hinchcliffe, said the bid was about “showing off” all that is great about the North.

“This is not just about Bradford, it’s about the North, and we’re a gateway to the North.”

“We’re well connected with other places in the North, and a number of them are now supporting our bid, such as Leeds and Halifax, which is great to see. We’re one of the youngest cities in the UK, 25 per cent of our population is under 16, and I think Government like the sound of that, it makes us a very dynamic and entrepreneurial city.“

“This is about attracting visitors globally and nationally to the North, and we have those connections already in Bradford. We speak 150 languages, 85 per cent of our small businesses are trading and exporting to countries around the world, so we’re capitalising on those. What people can do is speak positively about Bradford and our chances. I’ll be doing that, and so will other institutions around the district, so please join in.”

For more information about Bradford’s Great Exhibition of the North bid visit: http://www.gxnbradford.com