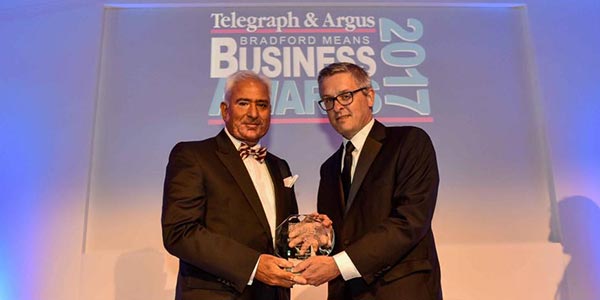 Nasser Malik, Chairman of the Yorkshire Enterprise Network (YEN) and Malik House Business Centres was among the winners of the 2017 Telegraph & Argus Bradford Means Business Awards last week, as he picked up the coveted ‘Business Personality of the Year’ Award.

The evening’s host, Former T&A Editor Perry Austin-Clarke, said: “We are here to celebrate business and especially business success in the Bradford district and I think we have a great deal to shout about in that regard.”

Nasser received the award as recognition for his efforts in establishing several new ventures in Bradford over the past few years, as well as attracting new businesses to relocate to the city with the office space available at the various Malik House Business Centre locations.

In his acceptance speech, Nasser said that: “I’m delighted and honoured to have won Bradford’s Business Personality of the Year. The Awards evening showed the great depth of enterprising talent in Bradford. The City is a sleeping Giant, and has fantastic potential to make a bigger economic impact for the Yorkshire region and the UK. I believe partnerships are the key to unlocking this potential”