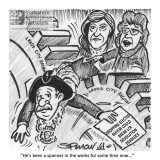 George Osborne and David Cameron may have said that an elected mayor was not something they were imposing on city regions, but councils were left feeling there was a gun pointing at their heads if they didn’t agree in so far as money could be withheld if they didn’t accept a mayor.

Now new Prime Minister, Theresa May, seems to be shifting her stance on this matter. This would certainly help to get the ball rolling with Leeds City Region where progress has come to a halt because of the mayoral question.

Sheffield City Region, who have already struck a devolution deal with the government, are now concerned that their deal could be jeopardised if the need for a mayor is scrapped. “If they do back off now then they must still back our plans for growth and we will relentlessly hold them to account for that,” said a Sheffield City Region spokesman.

There is also growing concern about the reasons for the Prime Minister’s altered stance. It has been reported that there is a determination on Mrs May’s part to avoid establishing Northern power bases which could help the Labour party in their key heartlands. This isn’t good news for the North and only increases the North – South divide as it continues to keep all the benefits and democratic powers firmly in Westminster instead of sharing prosperity and economic growth.