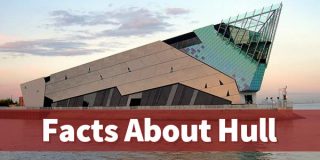 Lemsip (the cold and flu remedy), Bonjela (the oral treatment to relieve pain of mouth ulcers and denture sores) and Gaviscon (heartburn and indigestion relief) are popular medical brands that are common in most British households and all of them originate from Hull.

The phone in your pocket, the screen on your desk, the 42 Inch TV at your home. Would not be around today if it was not for work of Professor George Gray and his research team at the University of Hull, where they invented the first generation of liquid crystal displays (LCD).

Enjoyed by millions worldwide, the sugary treat was born in the City of Hull. Sweet manufacture Needlers, founded in the 19th century, can claim to be the first to produce the confectionery, which today can be found on the shelves around the globe. With sweet companies making millions world wide, they can all thank Hull the next time they see their paychecks.

The Deep is a public aquarium that is situated at Sammy’s Point at the confluence of the river Hull. Opened in March 2002, it was billed as “the world’s only submarium”, the current tanks contain thousands of sea creatures including seven different species of shark. The building was designed and built by Sir Terry Farrell and was part of the UK National Lottery’s Millennium Commission project.

Amy Johnson was born in Hull and was a pioneering English aviator. Johnson became the first female pilot to fly solo from Britain to Australia. Flying alone or with her husband, Jim Mollison, she set a number of long distance records during the 1930s. She also helped during in the war as part of the Air Transport Auxiliary. It was on one such flight in January 1941 that Amy Johnson died when her Airspeed Oxford went off course. Running low on fuel, she bailed out over the Thames Estuary, but was killed by the ship trying to rescue her in heavy seas.

Hull Fair is one of Europe’s largest travelling funfairs which comes to Hull for one week every year. Unlike smaller more local fairs, the Hull Fair attracts rides, and travellers from a wide variety of different regions across the country. The fair is one of Hull’s biggest traditions, as well as one of the oldest. In 1993 the fair celebrated its 700th anniversary making it one of the oldest running fairs in world, and a week that every local looks forward to.

The Humber Bridge is a single span suspension bridge, which opened to traffic in June 1981. At the time it was the longest suspension bridge in the world, however today it finds itself in seventh position which is still impressive. As of 2011 the bridge carried an average of 140,000 vehicles per week, and with toll fees of £1.50 that’s a lot money for driving across a bridge. With construction cost of £98,000,000 to pay back they’ll need quite a few more cars over its span before the bill is settled.

William Wilberforce was an English politician, philanthropist, and a leader of the movement to abolish the slave trade. A native of Hull, he began his political career in 1780 eventually becoming a Member of Parliament for Yorkshire. He later became an Evangelical Christian, which resulted in major changes to his life, and a lifelong commitment to reform, which led to the Abolishment Movement for Slavery in Britain. He died age 73 in 1833.

UK City of Culture is a title designated to a chosen city in the United Kingdom for a period of one year. The aim of the initiative, which is administered by the Department for Culture, media and sport, is to build on the success of Liverpool’s year as European Capital of Culture in 2008, which had significant social and economic benefits for the area. The inaugural holder of the award was Derry in 2013. In 2017, as you’ve probably heard, will see Hull hosting City of Culture, which locals are hoping will have a lasting effect on the city.

If you ask anyone from outside Hull what comes into their heads first when mentioning Hull they would probably say ‘Ferry Port’. The Humber port is the UK’s largest port complex, handling one million passengers and 90 million tonnes of cargo every year. It is essential for exporting British goods as 75 percent of UK manufacturing is within a four hour drive to Hull. Which makes it an extremely important hub for trading in and out of the UK.