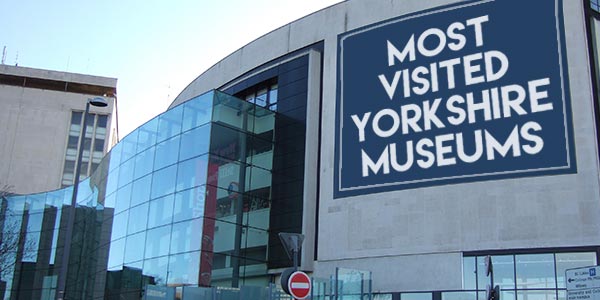 As summer approaches our thoughts wander to places we can visit and explore or just chill, relax and take in the views. Visiting places can also be a journey of discovery and Yorkshire has an abundance of museums that will engage and surprise.

For the culture enthusiast we have the famed ‘Sculpture Triangle’ made up of the Henry Moore Institute, The Hepworth Art Gallery and, the finest outdoor display of sculpture in the world, the Yorkshire Sculpture Park. From Jorvik to The Yorkshire Air Museum, there’s something for all ages and tastes.Not sure about where to go? We’ve taken a look at what’s available and come up with a rather interesting Top 10 to help you plan your busy summer schedule.

Cliffe Castle was originally the home of Victorian millionaire and textile manufacturer, Henry Isaac Butterfield. The house was completed in the 1880s with funding from the Butterfield family’s industrial empire, which included wool textile mills and a shipping business that took British goods to Europe, America and China. In recent years, Cliffe Castle has undergone a major restoration. Visitors can now see the Victorian rooms, furniture paintings and decorative art.

They also have many special galleries featuring natural history, archaeology and social history, there is also an internationally important display of stained glass by Morris and Co. They also host other exhibitions from their collections and the community, one of the castle’s more popular displays. In 2015, there were major disruptions to the grounds of the castle as improvements were being made that was funded by the Heritage lottery.

The museum itself is located in the major development of the ‘Museums Quarter’ in Hull since the 1980s. The highlights of their collections include the only dinosaur bones to have been found in East Yorkshire, mysterious bronze age warriors and a large collection of treasures from the Middle Ages. Other exhibitions also include an Iron age village and a Roman bath house. The museum has a wide range of animal history and human history too, with one of the more popular exhibits featuring a woolly mammoth and Saxon invaders.

Visitors can look forward to an unique experience that is described as both educational and fun for all ages. Other unique properties to the museum include an iron age longboat; the Hasholme boat was installed in the gallery its conservation chamber.

The Hull Maritime Museum is a museum that explores the seafaring heritage of the city and its environs. The Museums states that it aims “to preserve and make available the maritime history of Hull and East Yorkshire through artefacts and documents”. Built in 1872, the Grade 2 listed building was originally called the ‘Museum of Fishers and Shipping’ and first opened as a museum in 1912. The exhibits and collections cover a period from the Bronze Age all the way through to the Middle Ages.

The museum dedicates an entire gallery to Hull’s whaling industry which peaked in the early 19th century, the gallery has a massive collection personal effects, shipboard items, models, and artwork, as well as the largest collection of scrimshaw in Europe. They also have an exhibit that focuses on the historic maritime trade of Hull, mostly from the Middle Age and trade routes between Scandinavia and the Baltic Sea. The room houses a frieze containing the coats of arms of the cities with which Hull has historically had trade relations.

The National Coal Mining Museum for England is based at the site of Caphouse Colliery in Overton, near Wakefield, West Yorkshire, England. It opened in 1988 as the Yorkshire Mining Museum and was granted national status in 1995. The museum offers guided underground tours where visitors can experience the conditions miners worked in and see the tools and machines they used as the industry and the mine developed through the years.

Above ground there is a visitor centre which houses exhibitions on the social and industrial history of the mines. The extensive library and archive contains issues of “Coal News” and details of collieries throughout England. Other features include the pit head baths, steam winding house, boiler house and coal screening plant. It is possible to see former working pit ponies, ride the paddy train and follow the nature trail near to Hope Pit and water filtration tanks.

The museum is an Anchor Point of ERIH, the European Route of Industrial Heritage.

Streetlife Museum of Transport is a transport museum located in Kingston upon Hull, England. The roots of the collection date back to the early 20th century, however the purpose-built museum the collection is housed in was opened in 1989 by the then Hull East MP, John Prescott. The museum claims to have over 12,500 objects that are apart of its collection.

The core areas of the collection include Veteran cars, horse-drawn carriages and objects relating to local public transport. The museum forms part of the Museums Quarter in Hull, based on the historic High Street in the Old Town of the city. The Museums Quarter comprises the Streetlife Museum, the Hull and East Riding Museum (archaeology), the Arctic Corsair trawler and Wilberforce House Museum. The site is managed by Hull Museums, a department of Hull City Council on behalf of the people of the city.

Weston Park Museum is a museum in Sheffield, South Yorkshire, England. It is one mile west of Sheffield city centre within Weston Park. It is Sheffield’s largest museum and is housed in a Grade II listed building and managed by Museums Sheffield. The museum opened in 1875 in Weston House, whose grounds later became the park. Weston Hall was demolished in the 1930s and a purpose-built structure, adjoining the Mappin Art Gallery was funded in 1937. For most of its history the complex was known as the Sheffield City Museum and Mappin Art Gallery. The museum contained Sheffield’s archaeology, natural history, decorative art and social history collections.

The museum’s archaeology exhibits include a replica of the Bronze Age rock art from Gardom’s Edge and many items collected by Thomas Bateman, notably the Benty Grange helmet which closely matches the descriptions of warriors’ helmets in Beowulf. The museum is home to one of the longest serving weather stations in the country, providing data on Sheffield’s weather since 1882. Weston Park museum receives over 200,000 visitors a year and was nominated for the prestigious Gulbenkian Prize in 2007. In 2008 the museum won The Guardian’s Family Friendly Museums award.

The ceiling heights of the new building were designed to accommodate the longest staff weapons in the collections, displayed vertically, and the principal lift to move the largest object. In addition to the five original galleries which house 5,000 objects in the permanent displays and the more recent Peace Gallery, the museum also includes the Hall of Steel, a giant staircase whose walls are decorated with trophy displays composed of 2,500 objects reminiscent of the historical trophy displays erected by the Tower Armouries from the 17th century.

Leeds City Museum, originally established in 1819, reopened on 13 September 2008 in Leeds, West Yorkshire, England. It is housed in the former Mechanics’ Institute and admission to the museum is free of charge. Special exhibitions are hosted alongside a collection of displays from the Leeds Archive.

Over the years many of the museum’s collection has been lost, but small amount has survived across the years. The Leeds Tiger, the giant moose skeleton and the carved wooden cart took up much of the space. In 1999 the museum went into storage, though researchers and the public could view items by appointment. In 2001, Leeds City Council bid for National Lottery cash, and in 2004, it was awarded £19.5 million, so in 2005, the Leeds Mechanics’ Institute building began to be redesigned as Leeds City Museum, finally to reopen in 2008.

The National Media Museum is located in Bradford and is part of the national Science Museum Group. The museum has seven floors of galleries with permanent exhibitions focusing on photography, television, animation, videogaming, the Internet and the scientific principles behind light and colour. It also hosts temporary exhibitions and maintains a collection of 3.5 million pieces in its research facility. The venue has three cinemas, operated in partnership with Picturehouse Cinemas, including an IMAX screen, and has previously hosted popular film festivals, including the Bradford International Film Festival until 2014.

In September 2011 the museum was voted the best indoor attraction in Yorkshire by the public, and it is one of the most visited museums in the north of England. As of February 2016 the museum, in response to revenue shortfalls, has controversially adopted a policy of focusing on “the science and culture of light and sound” to the exclusion of what are seen as “unsustainable” aspects of creativity and culture, such as past film festivals.

In March 2016 a 7.5 million pound five year investment plan in the museum was revealed by the Science Museum Group.

The National Railway Museum is a museum in York forming part of the British Science Museum Group of National Museums and telling the story of rail transport in Britain and its impact on society. It has won many awards, including the European Museum of the Year Award in 2001. It is the home of the national collection of historically significant railway vehicles, as well as a collection of other artefacts and both written and pictorial records.

The museum displays a collection of over 100 locomotives and nearly 300 other items of rolling stock, virtually all of which either ran on the railways of Great Britain or were built there. Also on the 20 acres (8.1 ha) site are many hundreds of thousands of other items and records of social, technical, artistic and historical interest, exhibited mostly in three large halls of a former motive power depot next to the East Coast Main Line, near York railway station.